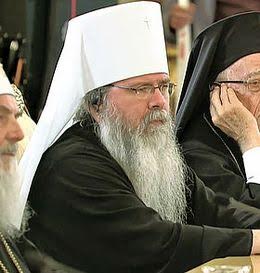 In the midst of an unusually intense agenda during his recent visit to Moscow for the celebration of the 70th birthday of His Holiness, Patriarch Kirill II, His Beatitude, Metropolitan Tikhon still found time to offer an interview to Interfax news agency.

Metropolitan Tikhon and a delegation representing the Orthodox Church in America that included His Grace, Bishop Daniel of Santa Rosa—see related story—returned to the United States on Wednesday, November 23, 2016, the eve of Thanksgiving Day.

In the interview, Metropolitan Tikhon was asked for his opinions on a number of topics, ranging from his personal background and conversion to Orthodox Christianity and his opinion on the recent US presidential elections to his impressions on the celebrations of which he and the OCA delegation were a part.

With regard to Patriarch Kirill, Metropolitan Tikhon spoke of “his great ability as an Orthodox Christian leader to exemplify this sense of unity.  I would like to wish him many years of health, strength to continue that work of unity, continue to be an inspiring spiritual leader for the Russian Orthodox faithful.”

On a somewhat lighter note, Metropolitan Tikhon also was asked if any celebrities were of the Orthodox Christian faith.  “Stars or not, when they come to the church, they are all the same,” he quickly responded.

Upon their arrival in Moscow on Friday, November 18, Metropolitan Tikhon and the OCA delegation were welcomed at the Patriarchal Residence at the Danilov Monastery.  After he and Patriarch Kirill venerated the altar in the Patriarchal Chapel, they engaged in a cordial meeting during which a number of matters of mutual concern were discussed.  Metropolitan Tikhon presented an icon of Saint Herman of Alaska and a custom-made book featuring the front pages of The New York Times for each year of the Patriarch’s life.  In return, Patriarch Kirill presented a set of vestments and an archpastoral staff to Metropolitan Tikhon.  During their meeting, English and Russian language editions of a collection of the Patriarch’s writings, titled Patriarch Kirill in His Own Words, were presented by His Eminence, Metropolitan Hilarion [Alfeyev] and Archpriest Chad Hatfield, CEO of Saint Vladimir’s Seminary, who oversaw the book’s publication in conjunction with the current celebration.

“I extend to Your Holiness the warm greetings of the Holy Synod of Bishops of the Orthodox Church in America and the fervent prayers of our monastics, clergy and faithful throughout North America on the occasion of the 70th anniversary of your birth,” Metropolitan Tikhon said in greeting Patriarch Kirill.  “The Orthodox Church in America, the youngest among the Orthodox Churches, is honored to participate in this historic event and to take her place in the company of the Primates and representatives of the ancient Patriarchates and Churches that have gathered in Moscow.  Much like the glorious celebrations in 2013, marking the 1025th Anniversary of the Baptism of Rus’, the present ceremonies are a testimony to Your Holiness’ concern for the unity of the Churches and initiative in facilitating a spirit of conciliarity.

“Your Holiness’ fraternal care for the Orthodox Church in America and your personal witness as a good and wise shepherd are well-known throughout North America,” Metropolitan Tikhon continued.  “Our clergy and faithful have seen your dedication to the pastoral task of service to God and your labors in fulfilling the apostolic work of the Church in your roles as First Hierarch of the Russian Orthodox Church, as Chairman of the Department of External Church Relations and as a humble monastic.

“It is often forgotten that monasticism plays a central role in the apostolic and missionary work of the Church and your Holiness has always been a champion of this path, even as recently as this year, when you convened an International Conference commemorating 1,000 years of Russian monasticism on Mount Athos,” Metropolitan Tikhon noted.  “The millennial witness of the Holy Mountain bore fruit in both the monastic labors of Saint Sergius of Radonezh and in the travels of the monastic missionaries to Alaska to plant the seed of the Holy Orthodox faith in the new world.  For these reasons, it is fitting, on the occasion of Your Holiness’ 70th Anniversary, to present You with this icon of the Venerable Herman, Wonderworker of Alaska and All America.  May this icon serve as a reminder both of the life of prayer and repentance that you embraced in your youth and of the love and respect that you have earned from the clergy and faithful of the Orthodox Church in America.  May the intercessions of St Herman, the first saint to be glorified by the youngest of the autocephalous Churches, continue to inspire Your Holiness in your faithful service to our Lord, God and Savior Jesus Christ as the Primate of the Russian Orthodox Church.”

Later the same day, Metropolitan Tikhon and the OCA delegation visited the Donskoy Monastery, where they were welcomed by the monastery’s Abbot, His Grace, Bishop Paramon of Bronnitsy.  After celebrating a Service of Intercession before the relics of Saint Tikhon of Moscow in the monastery’s main cathedral, Bishop Paramon welcomed Metropolitan Tikhon on behalf of the brotherhood and hosted him and the delegation members at lunch, during which they discussed a variety of matters related to monasticism and Church life.

As previously reported, Metropolitan Tikhon presided at the Divine Liturgy at the OCA’s Representation Church of Saint Catherine on Saturday, November 19, after which 40-day memorial prayers were offered for repose of the newly departed Archimandrite Alexander [Pihach], the late Dean of Saint Catherine’s and OCA Representative to the Moscow Patriarchate.  Among those in attendance was the Canadian Ambassador to the Russian Federation, John Kur, with whom Metropolitan Tikhon spoke at the reception that followed.

On Sunday, November 20, Metropolitan Tikhon and the Primates of the Sister Orthodox Churches or their respective representatives concelebrated the Divine Liturgy with Patriarch Kirill in Moscow’s massive Christ the Savior Cathedral and attended the reception that followed.  Over 300 hierarchs from across Russia and elsewhere served at the Liturgy, which was attended by numerous religious and political officials.  See related story.

The following day, Metropolitan Tikhon and the members of the OCA delegation attended a solemn convocation honoring Patriarch Kirill in the hall of Christ the Savior Cathedral.  Patriarch Kirill opened the program, which was attended by the delegations of the Local Orthodox Churches and hundreds of other hierarchs, clergy and faithful.

“In the Orthodox understanding, unity and conciliarity find their source in the Holy Trinity, and they are most clearly expressed through prayer and communion,” Metropolitan Tikhon said in his public address.  “It is in this spirit of prayer and communion that Your Holiness has gathered us together this week for the celebration of the Divine Liturgy and for brotherly fellowship.  These are not simply external acts, but serve as an inspiration for us to accomplish the apostolic work of the Church, and for this we are grateful to Your Holiness.

“Your Holiness is well known throughout the world for your leadership as First Hierarch of the Russian Orthodox Church, and before that, for your labors as Chairman of the Department of External Church Relations,” Metropolitan Tikhon observed.  “But the foundation of these labors, and the many other ministries you have undertaken, is your heart, which is the heart of a humble monastic.  It is often forgotten that monasticism plays a central role in the apostolic and missionary work of the Church, but Your Holiness has always been a champion of this path, and in this, you continue the long tradition of missionary and monastic activity in the Church of Russia.”

Metropolitan Tikhon went on to recall that “the very first missionaries to North America were monastics who traveled from Valaam to Alaska, bringing this same spirit of prayer and communion.  Although North America is not experiencing the level of violence, war and persecution that we find throughout the world, we nevertheless rely on prayer to both strengthen ourselves and to bring enlightenment to those darkened hearts which initiate such violence against Christians and non-Christians alike.

“The United States has just elected a new President,” Metropolitan Tikhon continued.  “Whether or not he can accomplish great things in the world remains to be seen.  Nevertheless, we are hopeful that there remain some traces of the Orthodox spirit of prayer and communion, as expressed by President Dwight D. Eisenhower in his First Inaugural Address on January 20, 1953: ‘Whatever America hopes to bring to pass in the world must first come to pass in the heart of America.’  Towards this end, the faithful of North America place their hope, not ‘in princes or sons of men,’ but in prayer which purifies the heart.  As Saint Theophan the Recluse writes, ‘Prayer is the test of everything; prayer is also the source of everything….  If prayer is right, everything is right.’  May the intercessions of Saint Herman, the first saint to be glorified in North America, and all the monastic saints of Russia and all the world continue to inspire Your Holiness with this spirit of prayer in your faithful service to our Lord, God and Savior Jesus Christ as the Primate of the Russian Orthodox Church for many years.”

Before returning to the US, Metropolitan Tikhon was received at the US Embassy by Honorable John Teft, US Ambassador to the Russian Federation, and Mr. David Horn.  Ambassador Teft offered his condolences on the repose of Archimandrite Alexander and discussed prospects for the appointment of his successor.  After discussing with Ambassador Teft a wide range of topics, including the US presidential election, the current role of religion in American life, and related topics, Metropolitan Tikhon presented a copy of the recently published book, Saint Tikhon of Moscow: Instructions and Teachings for the American Orthodox Faithful, and an icon of the Mother of God to Ambassador Teft.

“Our visit made it possible for me to meet and speak with the Primates and representatives from the Sister Churches—a rare yet highly welcomed opportunity,” said Metropolitan Tikhon upon his return to the US.  “I was especially happy to speak with His Beatitude, Metropolitan Sawa of Warsaw and All Poland about the possibility of organizing a pilgrimage of OCA faithful to the relics of Saint Maxim Sandowicz in southeastern Poland and others who extended similar invitations.”