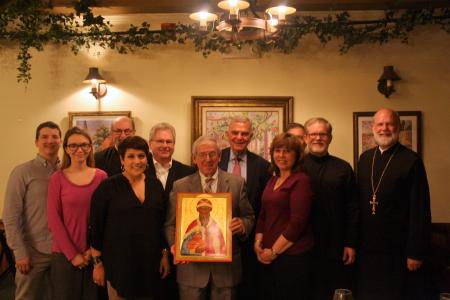 The Board of Trustees honoring Anthony Kasmer (center, with icon) for his 12 years of service as a board member (photo: Alexandru Popovici)At its Annual Meeting on November 10–11, 2016, our Seminary’s Board of Trustees welcomed three new members: Sharon Andrzejewski-Rubis, Jeffrey D. Hoff, and Carla Ann Newbern Thomas, M.D. Trustees also bid farewell to long-time board member Anthony Kasmer and bestowed on him the honorary title of “Trustee Emeritus.”

Mr. Kasmer served as board Treasurer for three years, and headed the Audit Committee for four years. His most “memorable moment” as a trustee, he noted, was co-chairing the Seminary’s 75th Anniversary gala with Executive Chair of the Board, Alex Machaskee.

“The 12 years of service by Tony Kasmer have been punctuated by his clear business incisiveness,” said Mr. Machaskee.

“His charismatic and sometimes humorous ways to make a point have helped create a pathway for the Seminary to proceed with a new business plan that will substantially set it on solid footing within the next three years,” he continued, “and his generosity of time, financial suggestions, and treasure are very much appreciated.”

Mrs. Andrzejewski-Rubis has worked professionally in the fields of Media Communications, Sales, and Broadcast News Operations and Engineering. Currently she resides in NJ and is employed at Dignity Memorial® network, in sales operations. She is a member of the Albanian Orthodox Diocese of America under Right Reverend Bishop Ilia Katre, and is a clergy wife, Prifteresha, in ministry with her husband, the Reverend Father Gregory Rubis.

Mr. Hoff is Vice President and Head of Global Execution Services at Two Sigma, a consulting firm that applies principles of technology within the financial services industry. He is Trustee for St. Andrew’s Camp in Jewell, NY, and a member of Saints Peter and Paul Orthodox Church, Jersey City, NJ, a parish of the Orthodox Church in America (OCA).

Dr. Thomas practices family medicine in Anniston, AL. She is a board member of Orthodox Christian Prison Ministry under the auspices of the Assembly of Canonical Orthodox Bishops of the United States of America. She also is a long-standing member of the Brotherhood of St. Moses the Black, and is the Parish Council Warden at St. Luke Orthodox Church (OCA), also in Anniston.

“The Trusteeship Committee, chaired by Protodeacon Peter Danilchick, did an outstanding job in recommending our three new board members of St. Vladimir’s Orthodox Theological Seminary,” Mr. Machaskee added. “The communication skills, compassionate care, and financial acumen represented by the new trustees will benefit the Board’s actions on behalf of the Seminary in an outstanding way.”