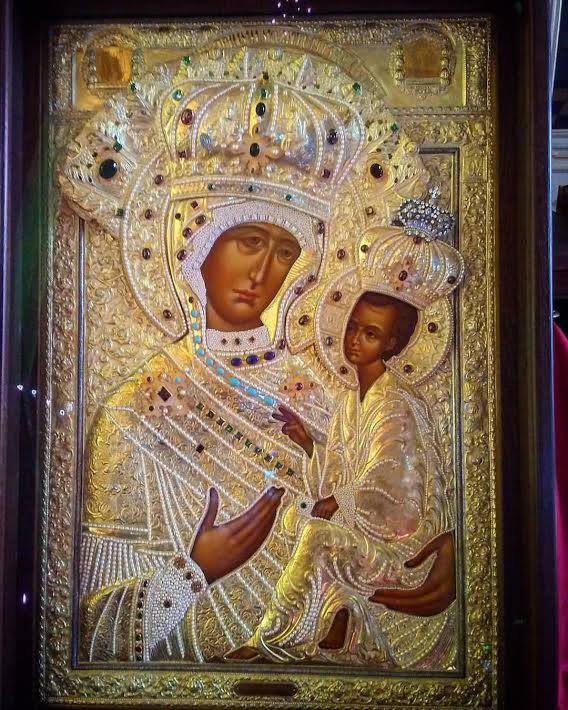 The icon is an exact reproduction of the original that was returned to Russia in 2004.

His Grace, Bishop Paul and a number of clergy and faithful were present as a reproduction of the Wonderworking Tikhvin Icon of the Mother of God was enshrined in Holy Trinity Cathedral here on Wednesday, November 9, 2016.

The icon—brought from Russia by His Grace, Bishop Mstislav of Tikhvin, who also was present—was to have been placed in the cathedral during the celebration of the feast of Saint John Kochurov on October 29-30.  Due to a number of delays encountered in shipping the icon from Russia, however, the icon did not arrive in time.

“Prior to Wednesday’s service, Bishop Mstislav carefully removed the packing materials used to protect the icon,” said cathedral member Larisa Fetterly.  “A faithful reproduction of the original, the icon is covered with a decorative sterling silver cover, or ‘riza,’ embellished with pearls and precious gems.” 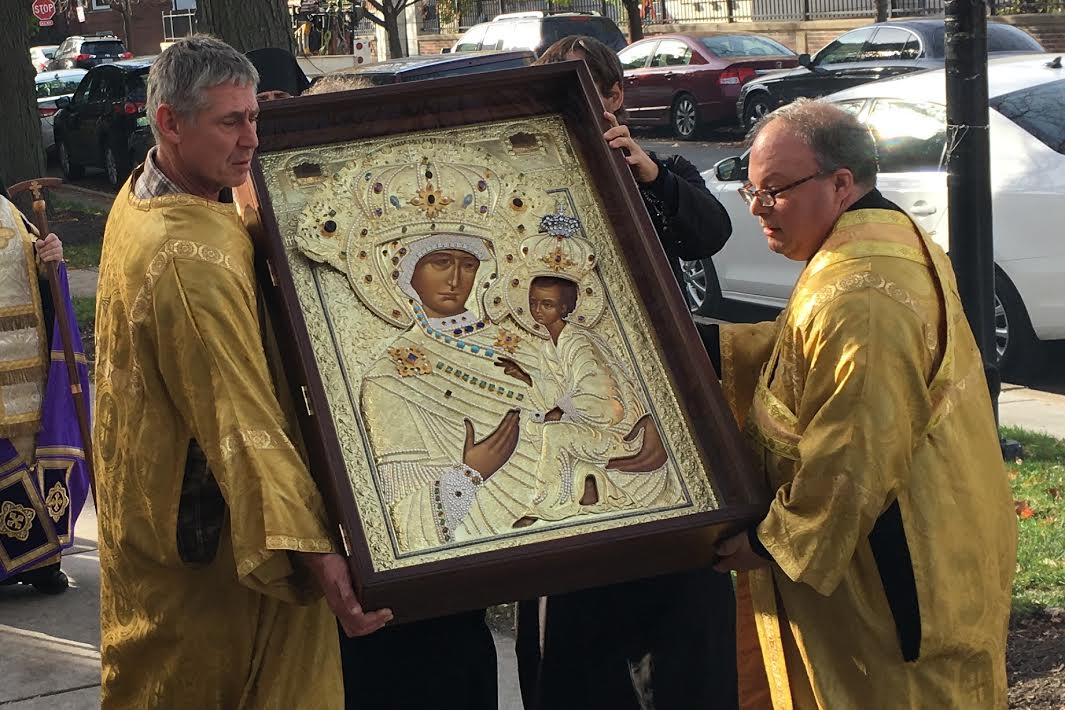 The icon was then brought in procession from the parish hall to the cathedral, at which time Bishops Paul and Mstislav, assisted by Deacons Thomas Keith and Alexander Koranda, celebrated the Akathistos Hymn in the icon’s honor.  Also in attendance were Hieromonk Onufrii, who accompanied Bishop Mstislav; Archpriest John Adamcio, cathedral Dean; Archpriest Mykola Bodnarchuk; and Priest Alexei Vassiouchkine.

“The final prayers of the Akathistos Hymn to the Tikhvin Icon made me realize the need we have for the protection of the Holy Theotokos, especially in light of the election of our new President-elect,” said Bishop Paul.  “We are a divided country and in need of her prayers for us.  May the presence of this icon be an instrument of peace for us in America.” 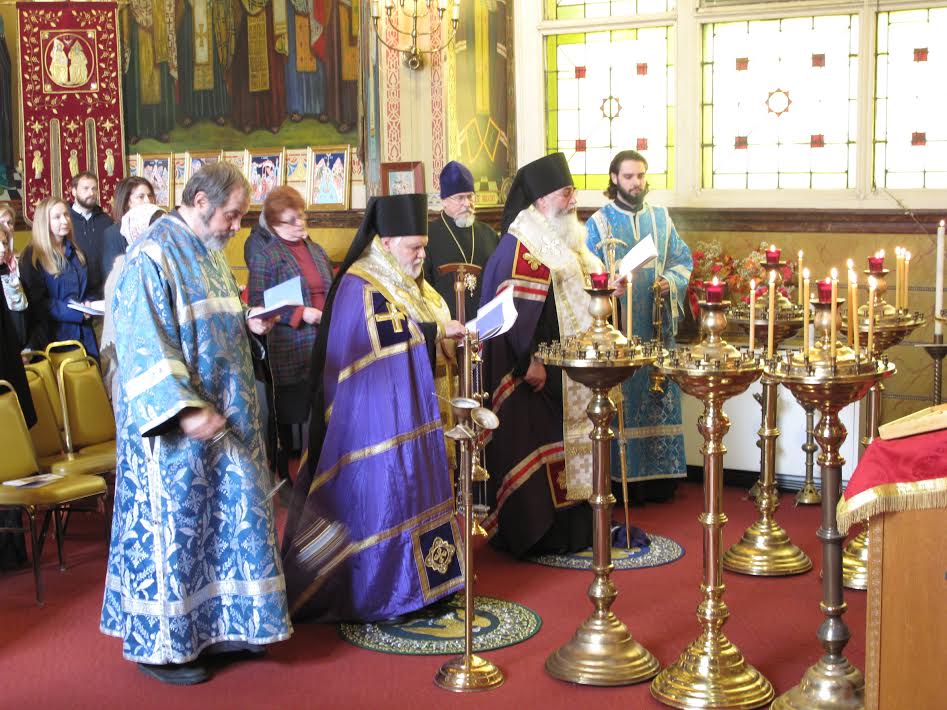 Bishops Paul and Mstislav lead the faithful in singing the Akathistos Hymn.

According to ancient tradition, the Tikhvin icon of the Mother of God is one of several painted by Saint Luke the Evangelist.  In the fifth century, the icon was taken from Jerusalem to Constantinople, where it was enshrined in the Church of Blachernae, which was built especially for this purpose.  In 1383, seventy years before the fall of Constantinople, fishermen on Lake Ladoga in the principality of Novgorod in northern Russia witnessed the icon miraculously hovering over the lake’s waters amidst a radiant light.  Shortly thereafter, the icon appeared in several neighboring towns, including the village of Motchenitsy on the bank of the Tikhvinka River, before it finally appeared near the town of Tikhvin.  A wooden church dedicated to the Dormition of the Mother of God was built on the site.  In 1560, by order of Tsar Ivan the Terrible, a men’s monastery was established near the church.  Over the centuries, the icon’s fame spread far and wide, with copies of the original adorning countless churches throughout Russia and beyond. 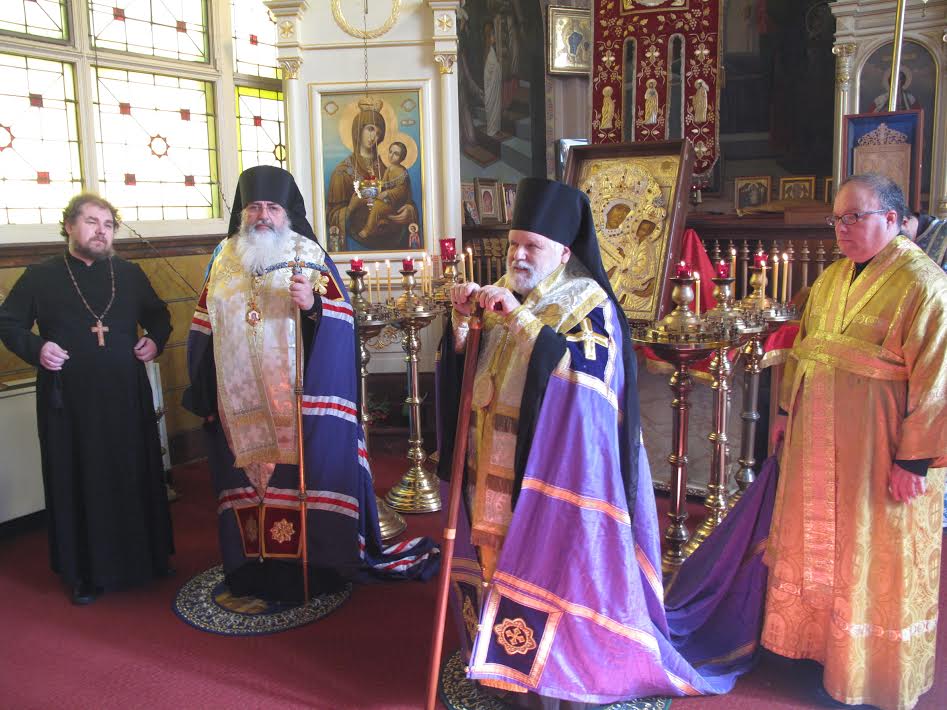 Bishop Paul preaches on the significance of the occasion in our times.

During the World War II German occupation, the Nazis removed the icon from the Tikhvin Monastery, from whence it was taken to Pskov and subsequently to Riga, Latvia.  When Riga was evacuated, His Grace, Bishop John [Garklavs] of Riga—later Archbishop of Chicago and Minneapolis—in whose care the icon was placed, took the icon to Bavaria, where it was venerated by Orthodox faithful who had been displaced because of the war.  While Soviet agents had spotted the icon, Bishop John was permitted to take the icon to the US in 1949, where it was venerated for many years at Chicago’s Holy Trinity Cathedral in Chicago.  After Archbishop John’s repose in 1982, Archpriest Sergei Garklavs, his adopted son and cathedral Dean, became the icon’s guardian.  In July 2004, the icon was returned to Russia and once again enshrined in the Tikhvin Monastery.

A photo gallery of the historic event may be viewed on the web site of the Diocese of the Midwest.