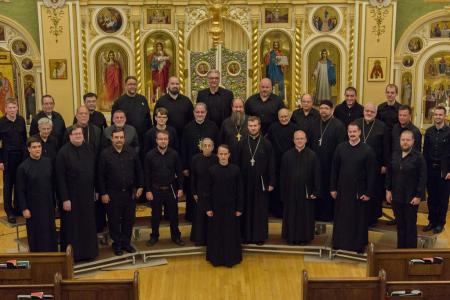 The Men’s Chorale, with Cathedral Choir members and alumni and friends of the Seminary (photo: Jim Varian)Hundreds of guests filled the historic St. Mary’s Orthodox Cathedra in Minneapolis on Friday, November 4, 2016, for a concert of liturgical music honoring the legacy and supporting the on-going mission of St. Vladimir’s Seminary. The concert was presented by the 32-member Men’s Chorale, featuring men from the Cathedral’s choir and alumni and friends of the seminary.

“St. Mary’s community has a long history of supporting theological education in North America, beginning with the first Orthodox seminary in North America which was located next door in the late nineteenth century,” said Archpriest Chad Hatfield, greeting those at the concert. “The Seminary is extremely grateful for your continued support of our work to prepare clergy, musicians, and lay leaders for serving the Church around the world.”

Dozens of seminary graduates were in attendance for the concert, including 12 graduates who sang with the Chorale, led by Deacon Gregory Ealy, a 2007 graduate of St. Vladimir’s. “St. Vladimir’s played a vital role in my personal formation as a church musician,” said Deacon Gregory, the founder and director of the chorale. “The knowledge I learned in the seminary’s classroom and applied in the chapel has guided my directing and pastoral role in my vocation and service for the Church.” 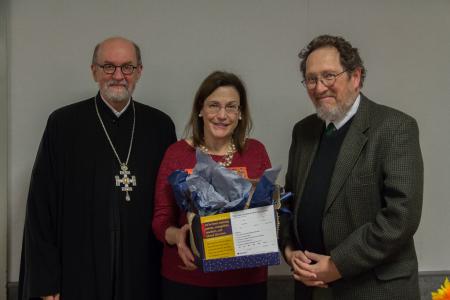 Dr. Will Jacobs (far right), winning the SVS Press book drawing at the concert reception, with Archpriest Chad Hatfield, CEO, and Sharon Macrina Ross, Director of Institutional Advancement at SVOTSThe Chorale presented a selection of hymns that could be described as the ‘greatest hits’ of the Seminary. “Many of these settings are near and dear to the hearts of anyone who attended St. Vladimir’s,” said Deacon Gregory. “We began with the Greek chant setting of Psalm 103, arranged by Nikolai Kedrov, Sr., and concluded with the well-loved ‘The Angel Cried’ by Mily Balakirev.”

Other selections included Rachmaninoff’s “Rejoice, O Virgin,” the Bulgarian chant setting of “The Noble Joseph,” and the Optina Hermitage melody of stichera for the feast of the Elevation of the Cross.

Following the concert was a reception during which those in attendance had the opportunity to chat with Father Chad and learn more about the Seminary and its work. “Our goal is to let the faithful know what we’re doing and how their support is vital to providing the best theological education for the twenty-first century,” said Father Chad. The concert and was the first in a new series of events planned to bring seminary leaders into local Orthodox communities to raise awareness of and create interest in the educational programs of St. Vladimir’s.

“One of the beautiful aspects of Orthodoxy is the richness of our liturgical music tradition,” Deacon Gregory noted. “And thanks to the labors and efforts of our professors and teachers at St. Vladimir’s, we are the recipients of that tradition, and able to sing ancient and new settings in English to bear witness to Jesus Christ and the Orthodox Faith.”