Elizabeth Thomas, a second-year Master of Divinity student at Holy Cross, won the Best Foreign Film Award at the Universal Film Festival in Kansas City, Missouri, on Saturday, October 1, for her short film “Anand,” about a “street kid rising from the ashes” in her native India. The mission of the UFF is to provide aspiring filmmakers with the opportunity to have their work seen and promoted.

“It’s a true story,” says Elizabeth, “about a boy who was raised in an orphanage and dreams of becoming a professional soccer player. His name means ‘joy’ in Hindi. I heard about Anand when I was working as assistant director on a McDonald’s commercial in Mumbai. A friend in Pune, where the orphanage is, told me he had a great story for me there, so I went and was really moved by Anand’s story. I gathered a crew, we had one week of intense shooting, then it took a month to create the film.” 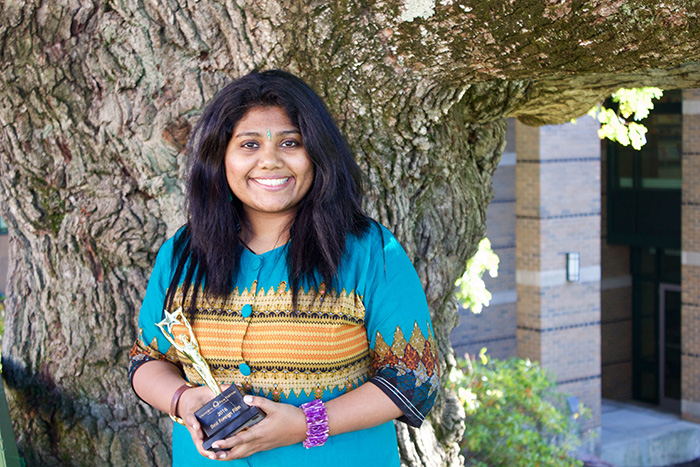 Almost 300 films, both short and feature-length, from over 50 countries were submitted to the festival. With such long odds of winning, Elizabeth had no expectations apart from meeting other filmmakers there. Even a dear friend, Rev. Fr. Anthony Salzman (MDiv 1989) advised, “Empty your bag of expectations and fill it with memories and experiences.” Initially, she did not expect to go at all because the cost of getting there was beyond her means, but “my fellow students were so proud of me that they said, ‘You have to go!’” and the Student Government Association raised the funds for her airfare. “I was so touched and so grateful.”

Elizabeth arrived in Kansas City knowing no one, but as soon as her 9½-minute film won the top award—beating out feature films by more seasoned filmmakers—”all kinds of people wanted to meet me and give me their business cards. It was just incredible!”

Growing up in Mumbai as the daughter of an Orthodox priest, Elizabeth “wanted to know where my talent was, what God wanted me to do.” Making her first film for a college course in mass communications ignited a passion for filmmaking that took her next to film school and work on a Bollywood blockbuster—hardly a conventional path for a priest’s daughter. Yet once her family realized how determined and how talented she was, they gave their blessing for her to pursue her dream.

Asked why she is studying theology, Elizabeth says, “I realized that I needed to get a deeper understanding of how to be a light of Christ, so I can help shape people’s lives through film.” And why Holy Cross? “I had met some Holy Cross students and learned about the school through them. It is such a supportive place. And I am fascinated by Greek culture.

Like every MDiv candidate, Elizabeth will be doing a master’s thesis in her final year—in the form of a film, of course. She is not yet sure what the subject will be, but “God will show me the way. Every good thing that has happened in my life is totally God’s grace.”

Learn more about the Universal Film Festival at http://universalfilmfestival.com.