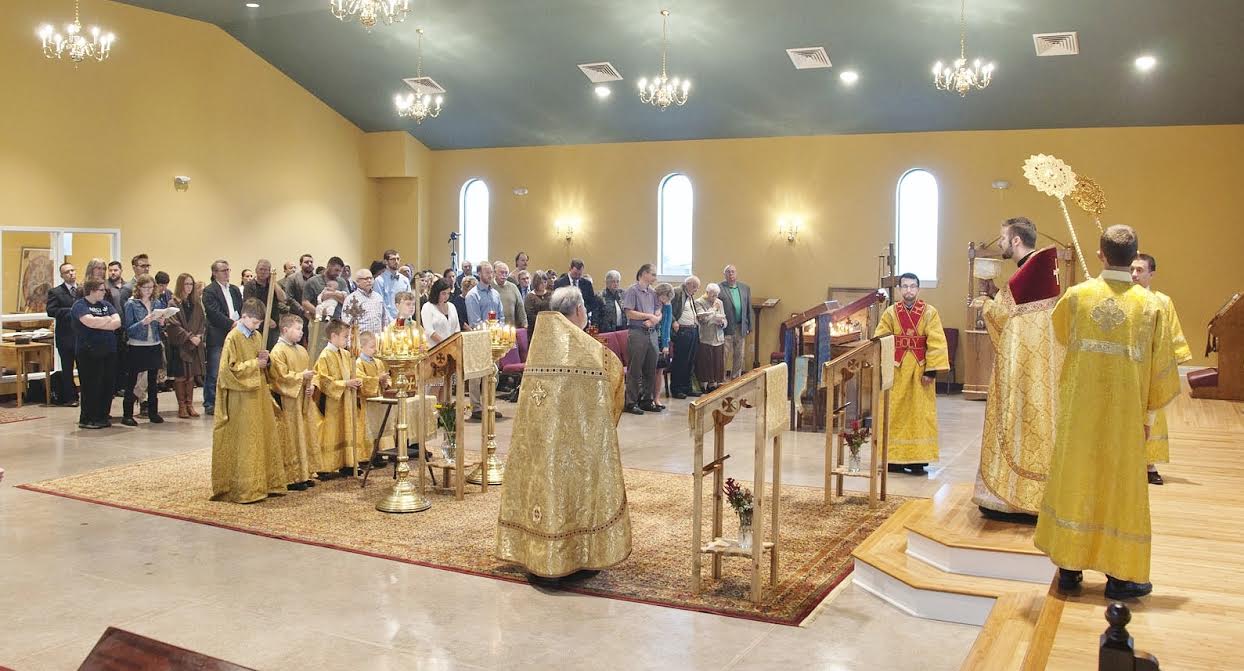 On the first weekend of October 2016, the faithful of Holy Apostles Mission, Mechanicsburg, PA celebrated their first services in their newly constructed “phase 1” multipurpose building.

“After three years of planning, some 130 area clergy and faithful gathered with His Eminence, Archbishop Mark for a Molieben and the blessing of the building, after which the first Great Vespers was celebrated,” said Archpriest Timothy Hojnicki, Rector.  “On Sunday morning, a record crowd of 141 faithful gathered for the celebration of our first Divine Liturgy in the new facility.”

Holy Apostles Mission was planted in 2004 with 22 souls present at the community’s first Liturgy.

“Since that time, we have rented space in a warehouse and bought a condo suite that had served us until the completion of our new building,” Father Timothy explained.  “Future plans are to build a proper temple next door, connect the two and convert the existing structure into a fellowship hall.  May God hasten this to fruition!” 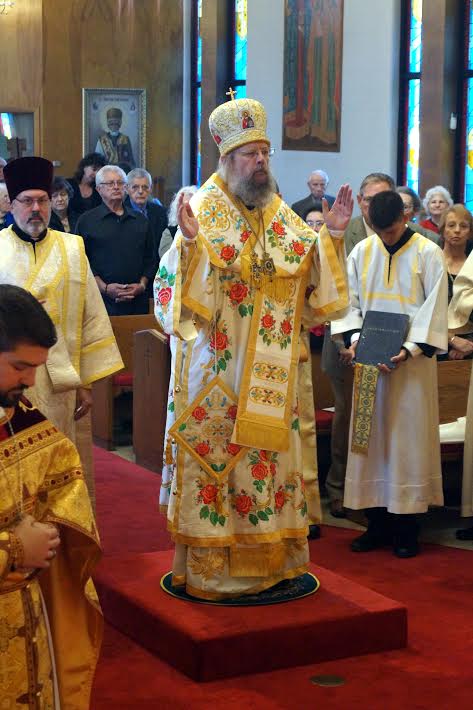 Archpriest Matthew-Peter Butrie and the faithful of Saint Nicholas Church, Burton, MI, celebrated the 100th anniversary of their parish on Saturday, October 15, 2016.  His Grace, Bishop Alexander presided at the Pontifical Divine Liturgy, concelebrating with clergy from across the OCA’s Bulgarian Diocese and Flint-area parishes.

“Established in 1916 in Flint, MI by immigrants from central and southern Europe employed in the automobile industry, the parish has evolved from a primarily immigrant community to one that has welcomed and continues to welcome people of every race and ethnicity,” said Father Matthew-Peter.  “It counts members who were baptized into Christ as children over 90 years ago and those who have been baptized as adults, as well as converts.”

Over 250 faithful attended the celebration and the festive banquet that followed at the Davison Country Club.

“In addition to the celebration of Great Vespers and the Hierarchical Divine Liturgy, during which Athanasius Boan was ordained to the subdiaconate, we also had a lovely 10 year anniversary banquet with remarks from some of the founders, as well as from Bishop Alexander and Father Marcus Burch, Chancellor of the Diocese of the South,” said Father Christopher, who was awarded a gold cross during the Liturgy.  “It was a beautiful weekend, and the faithful were greatly encouraged by Bishop Alexander’s visit and thankful for his continued blessing.” 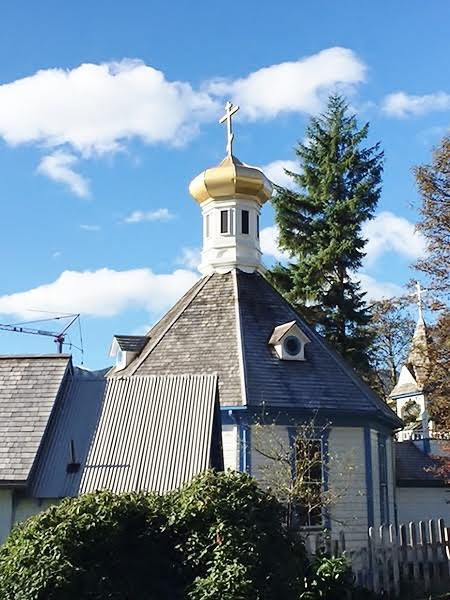 Thanks to the efforts of ROSSIA—“Russian Orthodox Sacred Sites in Alaska”—repair work on Juneau, AK’s historic Saint Nicholas Church was completed recently.

“Under the leadership of Sheri Buretta, CEO of the Chugach Native Corporation, and Grant Crosby, Senior Historical Architect for the National Park Service in Alaska, the ‘finishing touch’—applying a gold finish to the church’s dome—was completed by Frank Hutta of Coaldale, PA,” said His Grace, Bishop David.  “This last phase of the restoration project will renew and stabilize the historic church, visited by countless individuals each year.”

Juneau’s oldest church was built in the 1890s for the Tlingit faithful who embraced Orthodox Christianity in the 1800s.

“A project that began with a bell tower in serious need of repair led to the restoration of the church’s foundation, landscaping, and even the refurbishing of the old rectory next to the church,” Bishop David added.  “In the future, a fire suppression system for the church is being considered, and there are plans to move the old rectory back so the original entrance can be restored on the front of the building.”

Those wishing to offer financial assistance for the church’s ongoing restoration are invited to contact ROSSIA, Inc., PO Box 212315, Anchorage, AK 99521-2315.  Further information on ROSSIA’s work is available on line. 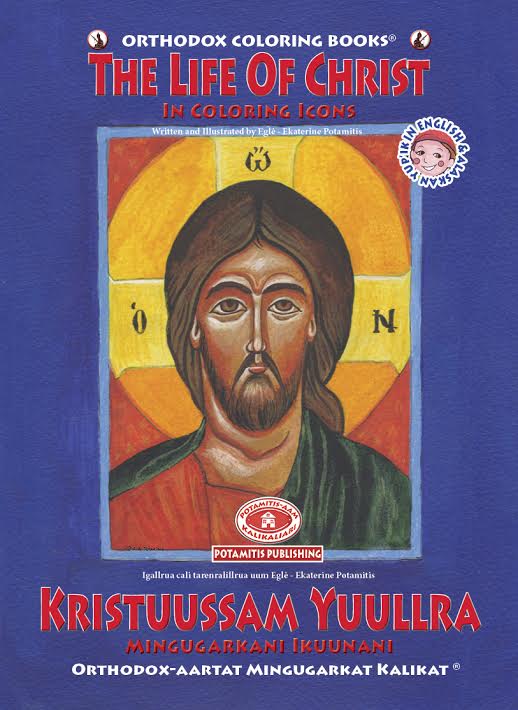 The Fellowship of Orthodox Christians in America [FOCA] recently funded distribution of Orthodox Christian coloring books in Yupik for children in the southwest region of the Diocese of Alaska where, according to His Grace, Bishop David, “Yupik is still very much used in many homes.”

The idea for the project began when an Orthodox teacher, Reader Basil Stuart, approached Archpriest Michael Oleksa about producing the books.

“Dionysios Potamitis, who had produced the original coloring books in English and Greek, was contacted, and the plan for translating two volumes into Yupik was devised,” Bishop David added.  “Archpriest Martin Nicolai, an accomplished musician and translator, was tasked with working on the translations of the books, which are available on-line.”

Father Martin completed his work in 2014, but the Diocese lacked funds to publish the books.

“Bishop David had mentioned the project to Marge Kovach and Becky Tesar, the FOCA’s current and past national Presidents, concerning the possibility of funding publication and distribution of the books,” said Archpriest Theodore Boback, FOCA national Spiritual Advisor.  “The project was presented to the FOCA Executive Board and Trustees for consideration as part of the ‘Gifts of Love’ project.  Delegates to the FOCA’s national convention in Chicago in July 2016 embraced the project, resulting in a total of $10,000.00 in donations.”

“Thanks to the FOCA’s ‘Gifts of Love’ project, the books were printed for distribution throughout the Nushagak, Yukon and Kuskokwim deaneries,” Bishop David explained.  “Not only will these books inspire our own youth in their faith, but they will serve as a means of introducing other children to Orthodox Christianity as well.”

A moving video featuring children from the Diocese of Alaska thanking the FOCA for their generosity and stellar example of stewardship is available on Facebook. 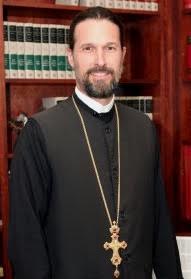 Priest Andre Paez and the faithful of Saint John the Evangelist Mission, Tempe, AZ, will host a free webinar retreat on Christian marriage with Archpriest Josiah Trenham on Saturday, November 19, 2016.

“We invite everyone to enter more deeply into the ‘great mystery’ of the relationship between Christ and His Church as reflected in the high calling of God for husbands and wives in Christian marriage,” said Father Andre.  “The webinar retreat will be based on Father Josiah’s lecture series, titled ‘The Good Husband and the Good Wife: Five Lectures on the Christian Ideal.’”

Father Josiah, a priest of the Antiochian Orthodox Christian Archdiocese of North America, is an internationally sought after speaker, founder and director of Patristic Nectar Publications, and author of numerous articles and books, including Marriage and Virginity According to Saint John Chrysostom and Rock and Sand: An Orthodox Appraisal of the Protestant Reformers and Their Theology.  His weekly homilies and theological reflections are aired by thousands on Ancient Faith Radio’s “The Arena” podcast.

“We are thrilled to host Father Josiah, who will address what is expected to be a ‘sold-out’ audience of faithful,” Father Andre added.  “Concurrently, the retreat will be lived streamed.  Webinar attendees will have the unique and exciting opportunity to participate in question-and-answer discussions via live chat.  The program will be especially helpful for husbands and wives who wish to enrich their marriage, those contemplating marriage, pastors, and everyone who desires to deepen his or her faith.” 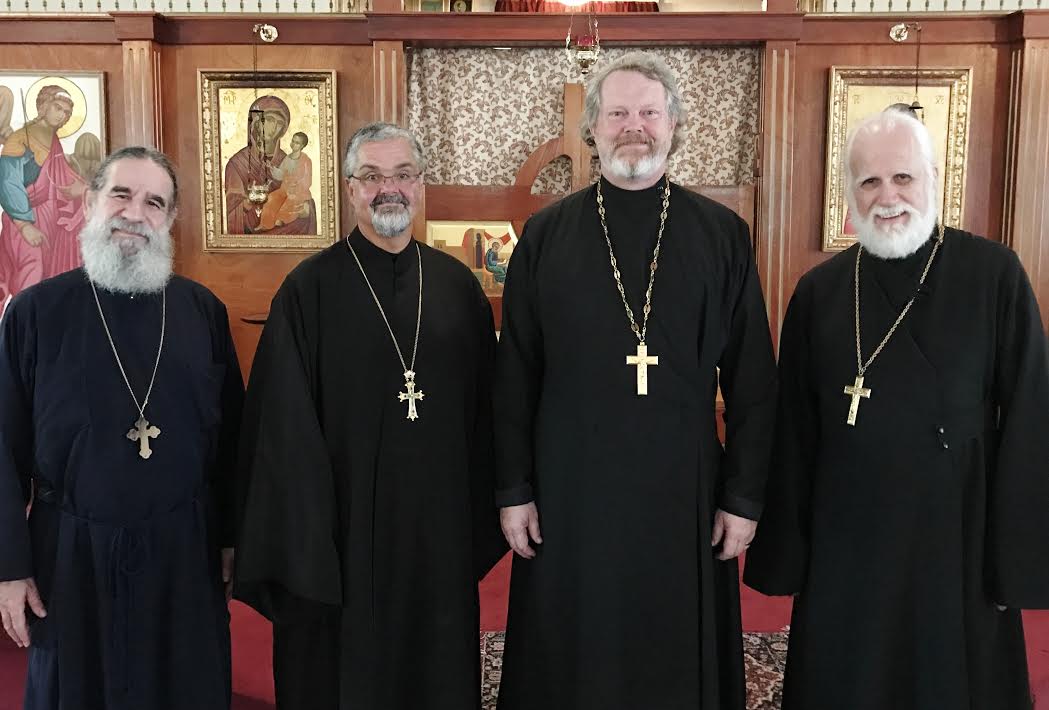 Priest John Brown, the only OCA Federal Corrections Chaplain, celebrated his final Divine liturgy at the Federal Corrections Facility in Atlanta, GA on Saturday, October 15, 2016.  Concelebrating were Archpriest Steven Voytovich, D.Min., Dean of Saint Tikhon’s Seminary and Director of the OCA’s Office of Institutional Chaplaincy, and Protopresbyter Panayiotis Papageorgiou, Ph.D., Pastor of Holy Transfiguration Greek Orthodox Church, Marietta, GA.  Archpriest Thomas Allesandroni and the choir of Atlanta’s Saint John the Wonderworker Church sang the responses under the direction of Matushka Rebecca Myers.  Many members of Father John’s family also were present for the celebration, as were a number of incarcerated persons.

In his moving sermon, Father John offered many Scriptural connections to incarceration and encouraged the incarcerated persons present to keep the faith through the coming time of transition.  Father Steven thanked Father John, on behalf of the Orthodox Church in America, for his dedicated service as a chaplain, and led those present in singing “Many Years” as Father John begins a new phase of his ministry.