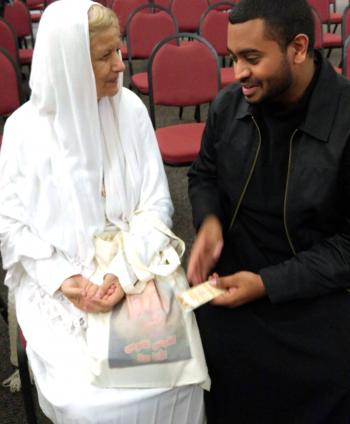 Mama Maggie enjoying a moment with St. Vlad’s Seminarian Bobby VargheseWhen “Mama Maggie” Gobran spoke Friday evening, October 22, on our seminary campus, she not only shared the wisdom of the gospel—she embodied it. Through the extraordinary witness of her own life, which is lived among destitute people in Cairo, Egypt’s teeming slums, she humbly but liberally shared the spiritual treasures she has discovered in her service to Jesus Christ.

“When I was young, I had a dream of what life was all about: I thought that the purpose of life was to be happy,” she began, “but when I grew up, I found out that life is giving, the art of giving.”

In 1997 Mama Maggie gave up her career as a professor of Computer Science at the American University in Cairo to found Stephen’s Children, a charity named after the first Christian martyr. The organization uses a holistic approach to meet the physical, spiritual, and practical needs of the poor by opening schools and camps for children, holding literacy classes for women, providing medical services, and offering job training for the unemployed.

In recognition of her work, Mama Maggie, who is a Coptic Christian and who has been called the “Mother Teresa of Cairo,” was nominated for the Nobel Peace Prize in 2012. Most recently, in 2015, her work again received international acclaim when major media reported that 7 out of the 21 Coptic Christians beheaded by ISIS were former students of Mama Maggie, once children, whom she had known by name and taught.

In spite of the terror, danger, and daily challenges associated with her ministry, Mama Maggie encouraged her audience to remain close to Jesus Christ and to remember his transformative power, by saying, “Don’t allow the world to shape your life; let your life shape the world around you.”