Feast of St. John Kochurov to be celebrated at Chicago’s historic cathedral October 29-30

Home/Jurisdictions/Feast of St. John Kochurov to be celebrated at Chicago’s historic cathedral October 29-30
Previous Next

Feast of St. John Kochurov to be celebrated at Chicago’s historic cathedral October 29-30 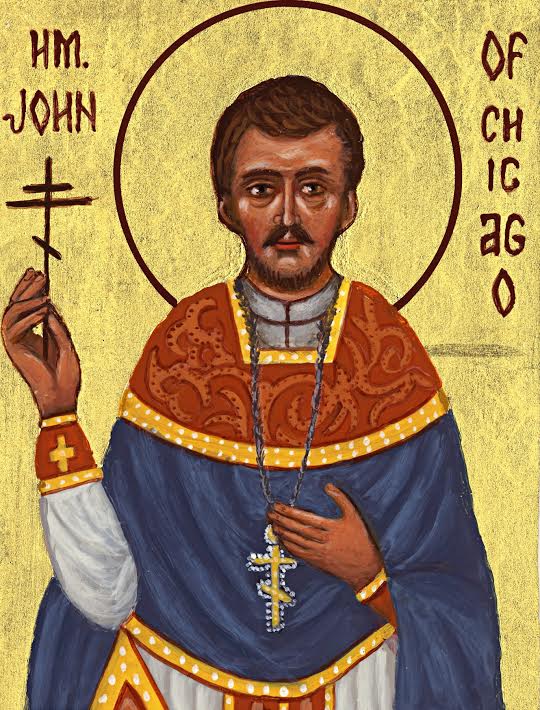 The early years of the 20th century witnessed the rise of a unique Chicago ecclesiastical landmark—Holy Trinity Cathedral, designed by noted architect Louis Henry Sullivan.  Collaborating with Sullivan in the cathedral’s construction was the parish’s rector, Archpriest John Kochurov, who had been assigned to serve Chicago’s Orthodox Christian community in 1895.  Consecrated in 1903, the edifice drew much attention at the time, being the first example of Byzantine and Russian architecture and iconography in the US Heartland.

Father Kochurov faithfully served the cathedral until he and his family returned to their native Russia in 1907.  Ten years later—on October 31, 1917—he became the first clergyman to be martyred for his faith at the outset of the Russian Revolution.  Canonized as a saint in December 1994—during the bi-centennial year of Orthodox Christianity’s arrival in North America—he is remembered to this day as “Saint John of Chicago”.

A major celebration of Saint John’s feast day will be observed at Chicago’s Holy Trinity Cathedral on the last weekend of October 2016.  His Beatitude, Metropolitan Tikhon will join His Grace, Bishop Paul of Chicago for the celebration.  Also participating in the weekend’s services will be His Grace, Bishop Mstislav of Tikhvin, Russia, who will gift the cathedral will an exact reproduction of the wonderworking Tikhvin Icon of the Mother of God—the widely venerated,  ancient icon that had been enshrined for centuries in Jerusalem, Constantinople and since the 1400s, northern Russia.  After World War II, the icon was brought to Chicago and enshrined in Holy Trinity Cathedral.  In 2004, it was returned to Tikhvin and once again placed in the monastery there.  The reproduction will be permanently enshrined in the cathedral.

According to the cathedral’s Dean, Archpriest John Adamcio, the celebration will begin at 2:00 p.m. on Saturday, October 29 with the greeting of the hierarchs at the cathedral entrance and the singing of the Akathistos Hymn in honor of the Tikhvin Icon.  The Vigil will follow at 4:30 p.m.

On Sunday, October 30, the festal Divine Liturgy will begin at 9:00 a.m. with the entrance of the hierarchs.  Another icon—depicting 19th and 20th century saints associated with the cathedral, painted by local iconographer Arlene Tilghman—will be blessed at the conclusion of services.  The icon anticipates the celebration of the 125th anniversary of the establishment of the cathedral community and the 100th anniversary of the martyrdom of Saint John which, according to Father Adamcio, will be celebrated in 2017.

Additional general and banquet reservation information is available on the cathedral web site.