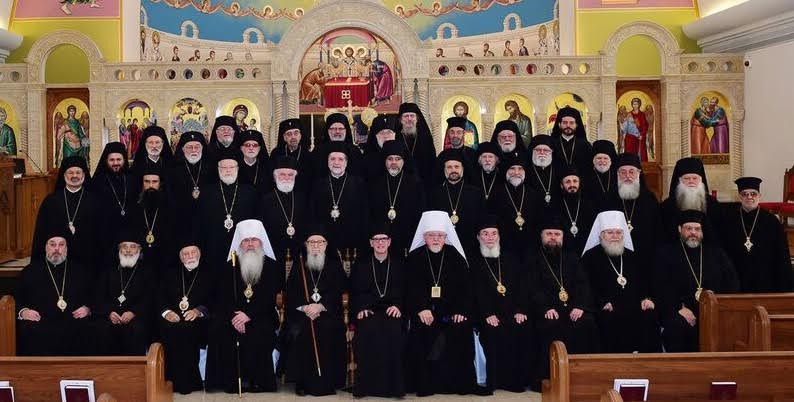 The seventh annual meeting of the Assembly of Canonical Orthodox Bishops of the United States of America drew to a close on Thursday, October 6, 2016.

The text of the opening address of His Eminence, Archbishop Demetrios of the Greek Orthodox Archdiocese of America, Assembly Chair, also was released.

Message to the Faithful
Assembly of Canonical Orthodox Bishops of the USA
Thursday, October 6, 2016

To our beloved Orthodox Christians throughout the United States of America:

“Forbearing one another in love, eager to maintain the unity of the Spirit” [Ephesians 4:3].

We, the members of the Assembly of Canonical Orthodox Bishops of the United States of America {{{LINK TO , gathered in Detroit, Michigan, for our seventh annual meeting on October 4-6, 2016, greet you with love in Christ as we offer glory and thanksgiving to Him.

Forty-one hierarchs assembled in order to recognize and reinforce our unity in the Orthodox faith. We express our deep gratitude to all those who planned and prepared for this year’s Assembly, which officially opened with the celebration of the Divine Liturgy at the Antiochian Orthodox Basilica of Saint Mary in Livonia, Michigan. The hierarchs were welcomed by host Bishop Anthony.

We remembered and prayed for our brother hierarchs kidnapped in Syria, the Greek Orthodox Metropolitan Paul Yazigi (brother of His Beatitude, Patriarch John X of Antioch) and the Syriac Orthodox Archbishop John Ibrahim.

In the opening session, the chairman, Archbishop Demetrios of America, delivered his address, raising a number of serious issues pertaining to the need to cultivate unity in Christ.  Archbishop Demetrios urged that the Assembly remain committed to the original mandate of the Mother Churches to work in a conciliar manner toward canonical unity for the sake of our faithful, with which the Assembly concurred. The hierarchs also heard executive reports from the Assembly officers.

A special informational forum was presented on religious liberty and provoked an engaging discussion. Distinguished guests addressed the Assembly on the First Amendment, how religion is portrayed in the news media, and global perspectives of religious freedom.

The chairmen of the Assembly committees presented their reports, followed by a review of their organization, with special attention focused on the presentation by the Committee for Canonical Regional Planning.

During the final session, the Committee for Canonical Regional Planning was authorized and endorsed to conduct a national study on the present state of inter-Orthodox cooperation on the local level. The Assembly also endorsed and approved requests made by the Committee for Youth, and those submitted by two of its agencies, International Orthodox Christian Charities and Orthodox Christian Mission Center. We agreed on the following with regard to the society in which we exercise our archpastoral ministry:

1)  We affirm our full support for the preservation of marriage as a life-long sacramental union of a man and a woman. We stress the importance of parenthood and family as unshakeable foundations of every society. As family originates from our Heavenly Father [Ephesians 3:15], it finds perfection in the iconic likeness of the intercommunion of the Holy and Life-creating Trinity.

2)  We unequivocally continue to denounce the violence and bloodshed in our country and throughout the world, especially in the Middle East and Africa, where hostility and brutality are occurring among members of different religions, sometimes supposedly in the name of religion, and also Ukraine. We pray for a just and enduring peace in the Middle East, for protection of Christian and other vulnerable communities against acts of genocide in Syria, Iraq, and Palestine, as well as for the cessation of terrorism and persecution, intimidation and displacement, racial discrimination and religious fanaticism.

3)  Furthermore, we recognize and lament: the crises in civil discourse, the polarization of society, the persistence of poverty, the challenges to religious liberty, the resurgence of racism, and the escalation of violence in our communities. The Assembly will study these and other pressing issues in order to prepare appropriate responses and to advocate before government and civil leaders to avert and alleviate these societal problems.

In conclusion, we continue to offer our paternal prayers, interceding that the Lord our God will not “let us grow weary in well-doing, for in due season we shall reap, if we do not lose heart. So then, as we have opportunity, let us do good to all humankind [Galatians 6:9-10].

May the abundant blessings of our all merciful God in Trinity be with you all.