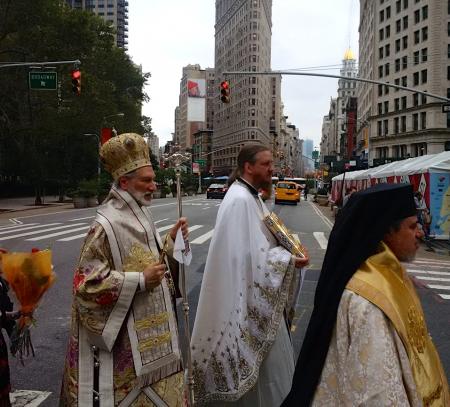 His Grace Irinej and St. Vladimir’s Dean Archpriest John Behr in procession to St. Sava Cathedral, NYC (photo: Adn. Joseph Matusiak)His Grace the Right Reverend Irinej (Dobrijevic), a graduate of both St. Vladimir’s Orthodox Theological Seminary (M.Div. ’82) and St. Tikhon’s Orthodox Theological Seminary, was enthroned as bishop of the Eastern American Diocese of the Serbian Orthodox Church on Saturday, October 1, 2016, at Holy Trinity Serbian Orthodox Cathedral, Pittsburgh. Formerly, His Grace was bishop of the Metropolitanate of Australia and New Zealand, a diocese that, like the diocese to which he is newly elected, is under the authority of the Serbian Orthodox Patriarchate.

During his Enthronement homily, His Grace encouraged his new flock to “consciously strive together for a life in Christ,” adding:

“For He first loved us, creating us as an extension of Himself—His Love—in this world and in this age. But this world, the holy ground on which we stand, which the Lord has created and sealed with His love and beauty (cf. Gen. 1:31), requires us to cooperate fully with the Triumphant God-Man so that we can joyfully enter the abode of God and be His people and that He would be with us and we would live according to the will of our Heavenly Father.”

On Sunday, October 2, Archpriest John Behr, dean of St. Vladimir’s Seminary, and Archpriest Alexander Rentel, the Seminary’s John and Paraskeva Skvir Lecturer in Practical Theology, celebrated with His Grace, as he presided at his first Divine Liturgy in New York City in his new capacity.

After the Liturgy, which was held in Madison Square Park, His Grace, celebrating clergy, and accompanying congregants walked in procession to the site of St. Sava Serbian Orthodox Cathedral, where Bishop Irinej presided at a Molieben and blessed the four corners of the cathedral. A devastating fire gutted the cathedral in June 2016, and therefore necessitated His Grace’s Enthronement in Pittsburgh on Saturday, instead of in his home cathedral in New York.