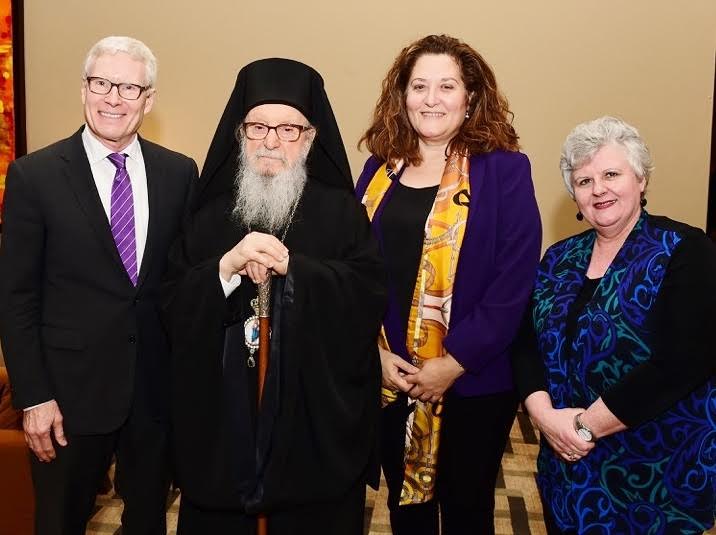 On Wednesday, October 5, 2016, the 41 hierarchs attending the seventh annual meeting of the Assembly of Canonical Orthodox Bishops of the United States of America participated in a special informational forum dedicated to the subject of religious freedom—a theme explored in three separate presentations.  [See related story.]

Dr. Charles Haynes, Director of the Religious Freedom Center and Vice President of the Newseum Institute, offered an overview of the US Constitution’s First Amendment and its central role in protecting the free exercise of one’s faith in America’s public square.  He encouraged the hierarchs to study how Orthodox Christianity is presented to the public, especially in public school textbooks, and shared his hope that seminarians would be educated in the area of religious freedom.

Dr. Debra Mason, Professor of Journalism Studies at the University of Missouri School of Journalism and Curriculum Specialist at the Religious Freedom Center, offered a presentation on the subject of religion in the media.  She highlighted the unique challenges facing the Church in utilizing digital media platforms to reach the faithful, especially the growing number of Millennials.

Turning their attention to elections, the hierarchs elected His Eminence, Archbishop Michael of the Orthodox Church in America to the position of Assembly Treasurer.  He succeeds His Eminence, Metropolitan Antony of the Ukrainian Orthodox Church of the USA, whose term of service had expired.  Elected to succeed His Grace, Bishop Basil of the Antiochian Orthodox Christian Archdiocese of North America’s Diocese of Wichita and Mid-America, whose term as Assembly Secretary also had expired, was His Grace, Bishop Gregory of the American Carpatho-Russian Orthodox Diocese.

Considerable time was spent reviewing the advancement of the work of the Assembly’s committees.

His Eminence, Metropolitan Methodios of the Greek Orthodox Archdiocese of America’s Metropolis of Boston, Chair of the Committee on Canonical Affairs, offered an update on efforts to establish a common clergy database that would provide the hierarchs with immediate access to the ecclesiastical status of every Orthodox clergyman across the nation.

His Eminence, Metropolitan Isaiah of the Greek Archdiocese’s Metropolis of Denver, Chair of the Committee for Military Chaplaincy, reviewed the possibility of designating the Assembly of Bishops as the religious organization to the US Defense Department and as the common Orthodox Christian Endorsing Agency.

His Grace, Bishop Thomas of the Antiochian Archdiocese’s Diocese of Charleston, Oakland, and the Mid-Atlantic, Chair of the Committee for Youth, updated the hierarchs on his committee’s work and expressed gratitude for the Assembly’s ongoing support of the various youth activities and endorsement of the annual Youth Worker and Camping Conference, slated to be held in January 2017.

His Eminence Archbishop Nicolae of the Romanian Orthodox Archdiocese in the Americas, Chair of the Committee for Canonical Regional Planning, presented a detailed report on the regional study of jurisdictional collaboration in Texas, New Mexico and Oklahoma.  The study revealed that grassroots parish collaboration may lead to greater pan-Orthodox unity through the establishment of local parish networks that may enhance the ability to address common interests, needs and concerns while providing opportunities to share ministries and resources.

The meeting drew to a close on Thursday afternoon, October 6.  Additional information, the Assembly Message and resolutions will be posted as they become available.