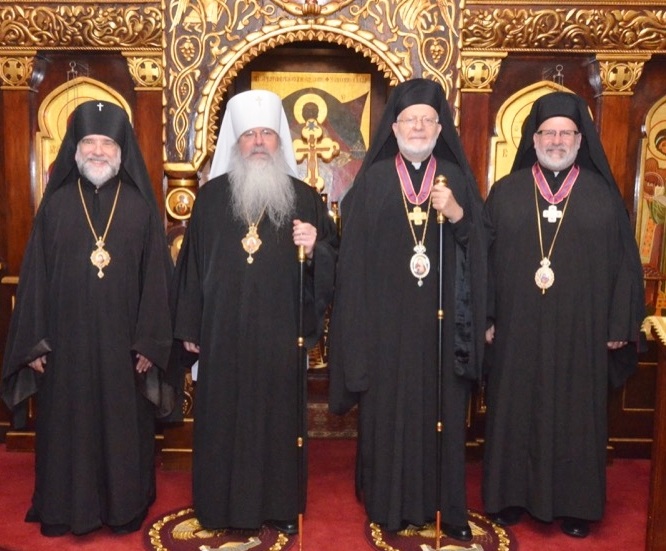 Accompanying Metropolitan Joseph was His Grace, Bishop John of the Antiochian Diocese of Worcester and New England and Archpriest Thomas Zain, Vicar General of the Archdiocese.  In attendance from the Orthodox Church in America were His Eminence, Archbishop Michael of New York and New Jersey and Secretary of the Holy Synod of Bishops; Protopresbyter Leonid Kishkovsky, Director of the Office of External Affairs and Inter-Church Relations; Archpriest John Jillions, OCA Chancellor; Archpriest Eric G. Tosi, OCA Secretary; and Archdeacon Joseph Matusiak, Secretary to Metropolitan Tikhon.

The visit opened with the celebration of a brief Service of Intercession in honor of Saint Raphael of Brooklyn in Saint Sergius of Radonezh Chapel, after which Metropolitan Tikhon awarded the Order of Saint Innocent, Gold Class, to Metropolitan Joseph “for his many years of faithful service to Orthodoxy in North America, leadership in the Antiochian Orthodox Christian Archdiocese of North America, and encouragement of theological education and monasticism throughout this continent‎.”

“I have personally known Your Eminence for many years, and we have had the opportunity to share our common love for Christ and His Church since the time of my consecration as Bishop of Eastern Pennsylvania and your appointment as Bishop of the Diocese of Los Angeles and the West, which occurred in the same year—2004,” Metropolitan Tikhon said as he made the presentation.  “During that time, I have seen Your Eminence’s faithfulness to Christ and dedication to being a good shepherd for your clergy and your faithful, always in a very personal and direct manner.

“I have also appreciated your good foundation in the monastic and ascetical tradition of our Orthodox Faith and your concern for theological education in North America,” Metropolitan Tikhon continued.  “And so, in recognition of all your apostolic labors for Orthodoxy in North America and for the Antiochian Orthodox Christian Archdiocese, especially as you take upon your shoulders the heavy cross of service as Archbishop of New York and Metropolitan of All North America for the Antiochian Church, I am pleased to bestow upon you the Order of Saint Innocent, Gold Class.  Mustahek!  Axios!”

Metropolitan Tikhon also awarded the Order of Saint Innocent, Silver Class, to Bishop John “for his many years of faithful service to Orthodoxy in North America, the Antiochian Orthodox Christian Archdiocese of North America and encouragement of pastoral formation throughout this continent.”

In turn, Metropolitan Joseph presented a panagia on behalf of the Antiochian Archdiocese to Metropolitan Tikhon while taking note of the close relationship of the Antiochian Archdiocese and the Orthodox Church in America.  He also recalled that most of the Archdiocese’s seminarians attend Saint Vladimir’s Seminary or Saint Tikhon’s Seminary, while stressing “the historical roots that we both share, given our common witness and heritage in this country, through individuals like Saint Raphael and Saint Tikhon.”  Finally, Metropolitan Joseph shared his desire to work more closely to help the Orthodox Church in North America in its ongoing growth and witness in the broken world in which we live today.

Lengthy discussions on various topics of mutual interest took place during a luncheon in the Chancery dining room.  Among the matters discussed was the mutual concern for the state of Christians in the Middle East and the current refugee crisis.  Metropolitans Tikhon and Joseph agreed to further discuss methods of cooperation to assist the victims of the crisis and to take steps to further highlight the seriousness of the situation to the faithful.  Also discussed was the recent Pan-Orthodox Council in Crete and the status of the Assembly of Canonical Orthodox Bishops of the USA.

Building on the experience of the Bilateral Commission of the OCA and the Antiochian Archdiocese, Metropolitans Tikhon and Joseph also considered various projects designed to strengthen mutual cooperation.