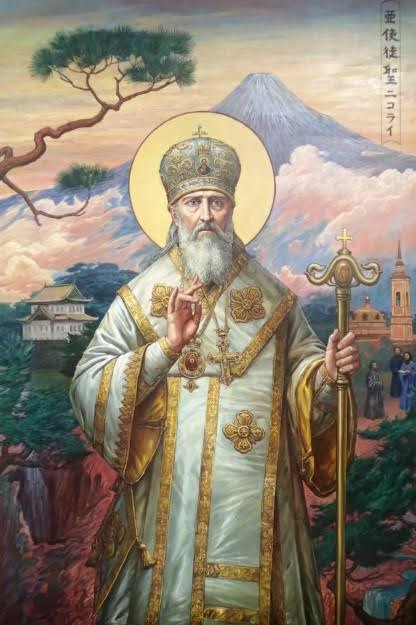 With the blessing of His Beatitude, Metropolitan Tikhon, Archimandrite Sergius, Abbot of Saint Tikhon’s Monastery, South Canaan, PA and Hierodeacon Maximus visited the Orthodox Church in Japan in July 2016.  During their visit, Archimandrite Sergius was given relics of Saint Nicholas of Japan, which have been placed in the Monastery Church of Saint Tikhon of Zadonsk and Saint Sergius of Radonezh Chapel at the Orthodox Church in America Chancery, Syosset, NY.

“Saint Nicholas was a great Apostle to Japan and tireless laborer working for the people of Japan and for the Lord,” said Archimandrite Sergius.  The first Orthodox missionary to and Bishop of Japan, Saint Nicholas spent several years mastering the Japanese language, after which he translated the Old and New Testaments and numerous liturgical and related works.  By the time of his repose in 1912, he had brought some 33,000 individuals into the Orthodox Faith, had trained and ordained a number of indigenous Japanese clergy, and had established parishes across the country.  He also built Tokyo’s impressive stone Holy Resurrection Cathedral, popularly known as “Nikolai-Do,” or “Nicholas’ House,” which remains one of the city’s most prominent architectural sites. 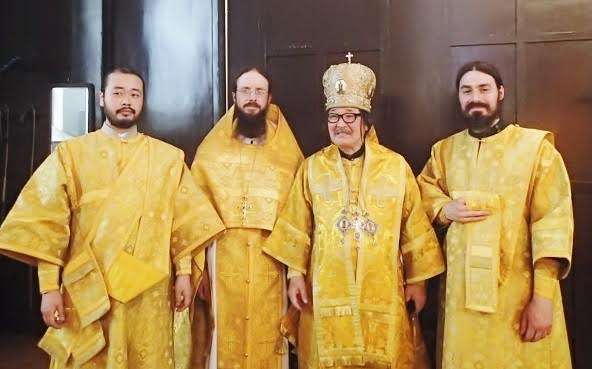 In a letter to His Eminence, Metropolitan Daniel of Toyko and All Japan, dated September 12, 2016, Metropolitan Tikhon his gratitude and that of the OCA for the relics. 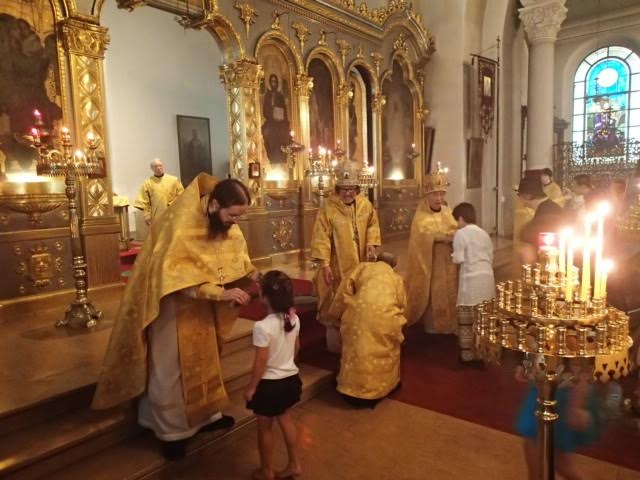 Archimandrite Sergius holds cross for veneration at the end of the Liturgy.

Metropolitan Tikhon also expressed his “gratitude for the care, love and hospitality shown to our Archimandrite Sergius of Saint Tikhon’s Monastery.  As always, it is a blessing from our Lord when the clergy and monastics of our local churches have the opportunity to worship and meet together.  I pray such meetings are as much an inspiration to Your Beatitude and the faithful under your care as they are to us.

“I look forward to a time when we might greet each other in person either here in the United States, or God-willing within Your Beatitude’s God protected territory of Japan,” Metropolitan Tikhon concluded. 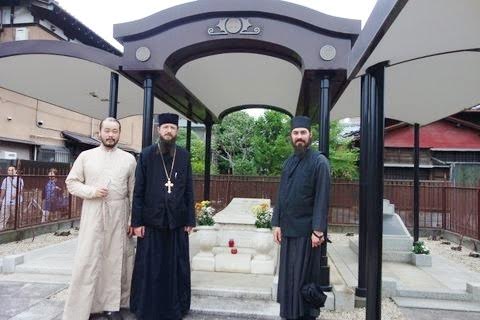 Deacon Iliya Toru with Archimandrite Sergius and Hierodeacon Maximus at the grave of St. Nicholas of Japan in Tokyo’s Yanaka Cemetery.

During their visit to Nikolai-Do, Archimandrite Sergius and Hierodeacon Maximus served the Divine Liturgy with Metropolitan Daniel, who presented the relics.  They also prayed at the grave of Saint Nicholas in Tokyo’s Yanaka Cemetery and visited other sites associated with Saint Nicholas’ legacy.

In related news, Archimandrite Sergius represented the OCA at a monastic conference in Moscow during the week of September 19, 2016.  Hosted by His Holiness, Patriarch Kirill of Moscow, the conference was attended by monastics from across Russia, the USA, Syria, Romania, Bulgaria and other countries.

According to Archimandrite Sergius, the purpose of the conference was to bring “abbots and abbesses together for instruction and mutual edification—a convocation for learning and prayer.”

While in Moscow, Archimandrite Sergius celebrated the Divine Liturgy at the OCA’s Representation Church of the Great Martyr Catherine.