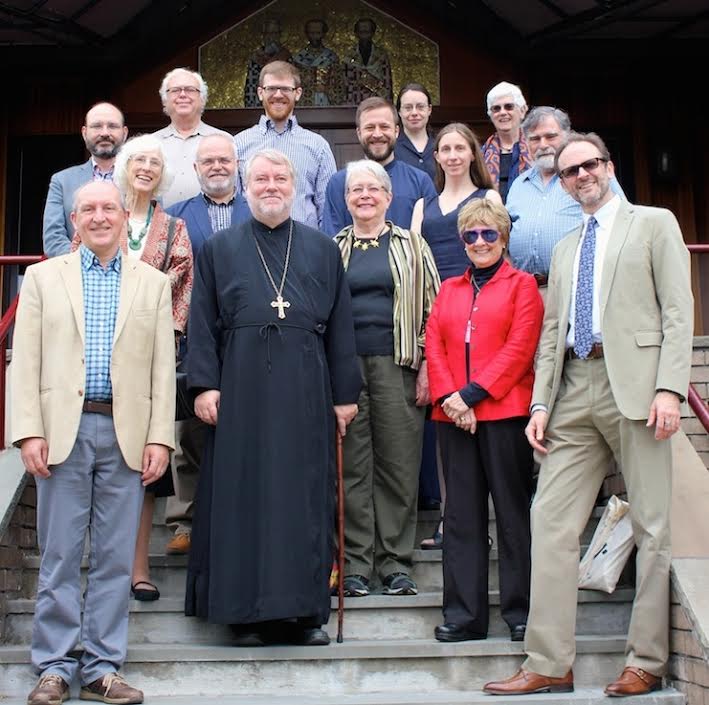 Highly influential global scholars and artists took seriously the task of “Rethinking Sacred Arts” at a weekend symposium at Saint Vladimir’s Orthodox Theological Seminary here September 16–18, 2016. Participants drew from their respective disciplines and expertise in exploring both historic categories and new ways of thinking about “sacrality” and “art.”

The symposium, which included a public panel discussion on Saturday evening attended by an audience of 75 people, was the first in a series of events planned between fall 2016 and spring 2018 by the seminary, all of which are a part of its Sacred Arts Initiative [SAI] funded by a grant from the Henry Luce Foundation.  See related story.

Dr. Peter C. Bouteneff, Professor of Systematic Theology at the seminary and SAI Director, coordinated the symposium, along with Deacon Evan Freeman, SVOTS alumnus and Ph.D. candidate in the Department of the History of Art at Yale University; Richard Schneider, Professor of Iconology and Hermeneutics at SVOTS; and Megan Carlisle Rakowski, a trained archivist and seminary alumna.

“In thinking freshly about what it means to call something ‘sacred,’ our symposium participants reflected on the dialogical relationship between God and the human person,” noted Dr. Bouteneff.  ” It is in the human response to God that we create and partake in objects, spaces, words, and sounds that bring us to the encounter with and praise of God.

“Our symposiasts also spoke appreciatively of the unique contribution that the Orthodox world can offer in reflecting theologically on the material world, on human creativity, and on the coming together of the sacred arts in the context of the Liturgy,” he added.  “Their participation in our chapel services made a great impression on them in that regard.”

Among the participants, three were within the Orthodox Christian tradition—sacred music composer Protopresbyter Ivan Moody, Chairman of the International Society for Orthodox Church Music and currently a researcher at CESEM-Universidade Nova de Lisboa; Vasileios Marinis, Associate Professor of Christian Art and Architecture at the Yale Institute of Sacred Music and Divinity School; and George Kordis, iconographer and former Professor in Iconography (Theory and Practice) at the University of Athens.

The next SAI event will be an international conference, titled, “Sounding the Sacred,” May 1-4, 2017, which will continue the work of the Arvo Pärt Project at Saint Vladimir’s Seminary.

An audio recording of the public panel discussion and a photo gallery are available on-line.