IOCC “on the ground” to aid W VA flood victims

IOCC “on the ground” to aid W VA flood victims 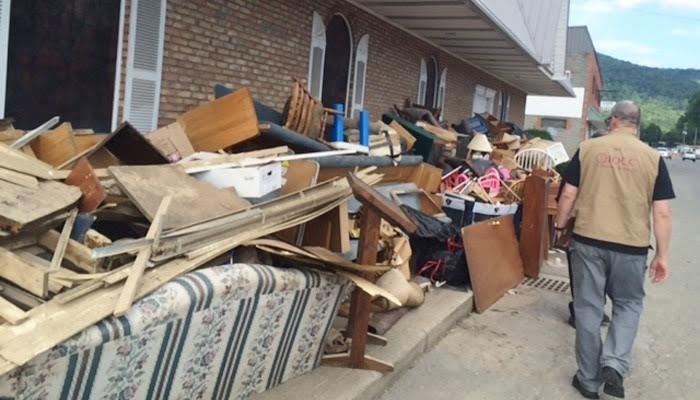 Deacon Constantine Shepherd, an IOCC Frontliner, assesses extensive property damage to a community church along the main street in Rainelle, WV.  IOCC is on the ground responding to the immediate needs of families impacted by devastating floods in the region.  [Photo: Marilyn Brady]

As torrential rain pummeled parts of West Virginia and threatened a new round of flooding, International Orthodox Christian Charities [IOCC] remains on the ground providing emotional and spiritual care and deploying volunteer clean-up crews to the hard hit towns of Clendenin and Rainelle.

Priest Joel Weir, Rector of Saint Stephen Church, Crawfordsville, IN, is among the IOCC emergency responders deployed to the region in early July.  Father Joel, who has been involved in ongoing training with the IOCC’s Frontline program over the past five years, is providing spiritual and emotional counseling at one of the disaster centers set up in West Virginia.  In December 2012, Father Joel was among several clergy who represented the Orthodox Church in America at a conference on Orthodox Christian Engagement hosted by the White House Office of Public Engagement, during which strategic service alliances with the White House’s Office of Faith-Based and Neighborhood Partnerships were discussed.  See related story.

According to IOCC, His Grace, Bishop Thomas of the Antiochian Orthodox Christian Diocese of Charleston, Oakland and the Mid-Atlantic. visited the affected area to offer encouragement to parishioners impacted by the floods and called upon the Orthodox faithful to extend a helping hand to their neighbors in need by supporting IOCC’s flood relief efforts.

“From the very beginning of Our Lord’s ministry, the Church has existed both as a community and within a community,” stated Bishop Thomas.  “In these roles, there are a variety of activities that the parish Church undertakes, both in terms of liturgical services and in charitable work and outreach.  If there is liturgy without outreach, then we fail, since ‘faith without works is dead,’ but if we have outreach without liturgy, we also fail, since ‘man is not justified by works of the law but by faith in Jesus Christ.’”

Aided by a generous give of $25,000.00 from the Greek Orthodox Ladies Philoptochos Society, further support for flood relief to affected families is being provided, while IOCC Frontliners continue to assist FEMA and the local Red Cross at disaster recovery centers and relief distribution centers.  Partnering with Mennonite Disaster Services, IOCC volunteers are helping to remove debris from homes and addressing clean-up and recovery.  IOCC is also participating in the long-term recovery committee being established by community leaders in Greenbriar County and the West Virginia Voluntary Agencies Active in Disaster.

Gifts to help IOCC in its ongoing efforts to help the victims of disasters in the US, like the West Virginia floods, may be made to the United States Emergency Response Fund.

IOCC is the official humanitarian aid agency of the Assembly of Canonical Orthodox Bishops of the United States of America.  Since its inception in 1992, IOCC has delivered $580 million in relief and development programs to families and communities in more than 50 countries.  IOCC is a member of the ACT Alliance, a global coalition of churches and agencies engaged in development, humanitarian assistance and advocacy.