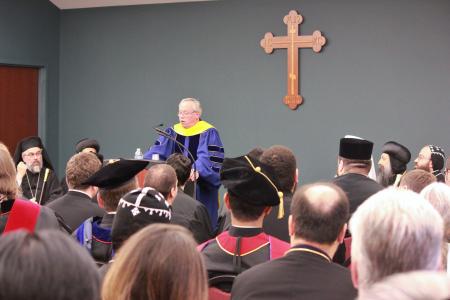 Meyendorff’s presence at the Seminary is legendary. He arrived at St. Vladimir’s in 1959, as a boy, with his parents, Marie and Father John Meyendorff (Professor of Patristics and Church History and Dean of the Seminary from 1984–1992), and grew up within its confines, initially in New York City and later near its Yonkers campus. Upon receiving his Master of Divinity degree from St. Vladimir’s in 1975, and his doctoral degree from the University of Notre Dame in 1987, he immediately began his teaching career at the Seminary, focusing on the theology of liturgy and the practical implications thereof in parish settings.

In 2014, by student vote, he was recognized for his excellence in teaching and was presented with the Student Council’s “St. Macrina Award.” In 2016, he was selected by his fellow faculty to be guest speaker at Commencement Exercises, and in his address, he summarized the goal of seminary training as teaching students to respond “…faithfully and creatively to the questions being posed to us today, using a language and categories that contemporary humanity can receive and grasp.” On Commencement Day, he also received the silver St. Innocent Award from His Beatitude Metropolitan Tikhon, primate of the Orthodox Church in America (OCA), for his service to the Seminary and to the Church.

In speaking about his upcoming move with his wife, Peggy, to Burlington, VT, Meyendorff noted, “It’s really ‘semi-retirement,’ because I’ll retain my position as Editor of the Quarterly—a job I’ve enjoyed over a period of 15 years. So, technically, I’ll still be a faculty member, though not a classroom professor.

“Additionally, I’ll be continuing my ecumenical work, another aspect of my professional career that began in the early 1990s, starting at the Faith and Order Commission at the National Council of Churches of Christ,” he remarked. “In fact, I have meetings already scheduled for the fall of 2016.” Those meetings include a Pan-Orthodox consultation on an ecclesiology statement prepared by the Faith and Order Commission of the World Council of Churches (WCC) in Cyprus, October 5–13, and a session of the St. Irenaeus Orthodox-Catholic Working Group in Taize, France, November 1–6. 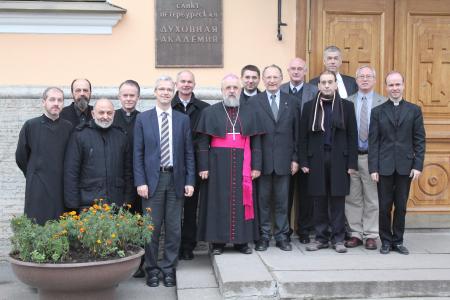 His other extraordinary contributions to ecumenical work include his participation in consultations on baptism sponsored by the WCC’s Faith and Order Commission, held in Prague, Czech Republic, June 2000; Faverges, France, October 2001; Vienna, Austria, April 2004; and Geneva, Switzerland, November 2006. Additionally, he co-drafted a WCC Faith and Order Commission Study Document titled “Christian Perspectives on Theological Anthropology” at Geneva, in 2005.

Fellow faculty member Peter C. Bouteneff, professor of Systematic Theology at St. Vladimir’s, recalled Meyendorff’s expertise in ecumenical settings, saying, “One of the contexts I most enjoy being with Paul is at international meetings, both inter-Orthodox and inter-Christian.

“These meetings involve real complexity, both political and theological, and Paul never fails to make a significant contribution, emanating from his academic learning, diplomatic skills, and his deep sense of what the Church is and what it is for,” noted Bouteneff.  “As a result, he is widely—indeed, universally—respected for his opinions and insights. I’m happy to know that he will continue to contribute to these meetings, making the Seminary and the Church proud.”

Similarly, Brian Daley, S.J., recalled, “Professor Paul Meyendorff has been one of the anchors of our North American Orthodox-Catholic Consultation for 13 years, and we hope he will continue to be that for our Churches, as they work towards greater understanding and unity. 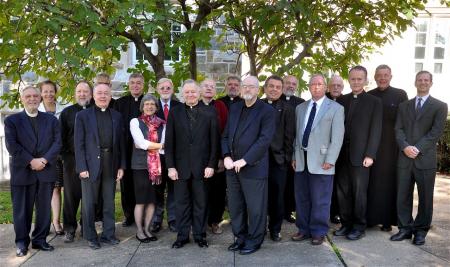 With the North American Orthodox Catholic Theological Consultation in Washington, D.C.“His background as a liturgist and theologian, and as the personal heir to the rich Meyendorff family tradition of twentieth-century Orthodox theology, has made him an irreplaceable voice of learning, moderation, and balance in our conversations, as well as in the international dialogue of the German-based ‘St. Irenaeus Group,’ in which I have been privileged also to take part,” Father Daley continued. “Paul always speaks his mind seriously and honestly, is well-informed and reflective, and above all is gifted at hearing the positive, Christ-like tones in the voices of other people.

“All of this,” noted Father Daley, “makes him the ideal companion in our Churches’ search for what will build communion. I pray that retirement from teaching, and the serenity of Vermont, will enable him to keep on playing this crucial role in ecumenical dialogue.”

But Meyendorff’s future value to Orthodox church life may well lie in his vast experience with Orthodox Christians from a multitude of jurisdictions—at home and abroad, and with seminarians in his classrooms as well as representatives of Orthodox Churches in ecumenical settings. He is sought out for his rare analytical perspective on Orthodox ecclesial affairs in North America that continue to have reverberating effects throughout the world—especially the OCA’s journey to autocephaly, or self-rule, granted to it by the Russian Orthodox Church in 1970. It was primarily for this work that the Saint-Serge Orthodox Theological Institute in Paris awarded him an honorary doctorate in 2013. 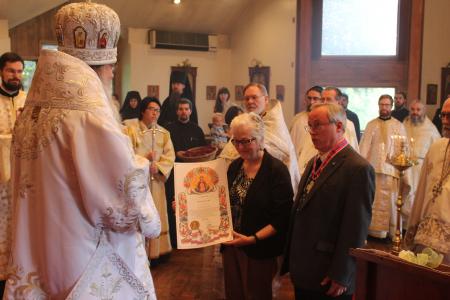 In 2014 he was interviewed by Ancient Faith Radio on the topic, “Ecclesiology and Nationalism in the Postmodern Era,” which focused on the challenges of creating a united, territorial, non-nationalistic church in North America: one autocephalous, autonomous church that would reunite all Orthodox Christians in this country. “The important thing at this point,” he stated during that interview, “is to keep the conversation going, and to get out of the maze that we find ourselves in.

“The hope is that we can regain that vision and the urgency of the situation,” he noted. “All it would take is for all the bishops [in North America] to say, ‘Let’s get together; let’s form a local synod and present the Mother Churches with a fait accompli.’

“Historically, that’s how most instances of autocephaly took place,” he said. “Typically, they were a fact ‘on the ground’ and then were recognized—sometimes twenty, thirty years later. Actually, in the case of Russia, it was one hundred and fifty years after the de facto autocephaly of the Russian Orthodox Church that this was formally recognized by a council presided over by the Ecumenical Patriarch.”

When asked what he’d still like to accomplish for the Orthodox Church at-large if given an open door by the Spirit, he observed thoughtfully, “My work at the Seminary, for the OCA, and in ecumenical settings has blessed me with remarkable past, a remarkable overview of unprecedented and unexpected historical events in Orthodox ecclesial life.

“God willing, I would hope to be blessed with work in the future that would help the Orthodox Church to face the challenges of the twenty-first century, to transcend the limitations of ecclesial nationalism, and to speak to a world that needs to hear its message.”

Listen to Dr. Meyendorff’s podcast on Ancient Faith Radio, “Ecclesiology and Nationalism in the Postmodern Era.”