Holy and Great Council concludes on the Sunday of All Saints

Holy and Great Council concludes on the Sunday of All Saints 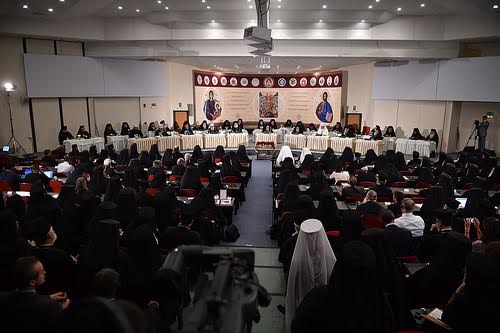 The Holy and Great Council officially concluded with the Patriarchal concelebration of the Divine Liturgy on June 26, 2016—the Sunday of All Saints—at which His All-Holiness, Ecumenical Patriarch Bartholomew of Constantinople presided.  The Council’s concluding session was held one day earlier.

According to a release issued by the Press Office of the Holy and Great Council, His All-Holiness, Ecumenical Patriarch Bartholomew, “expressed his joy for the willing and positive response of the Local Autocephalous Orthodox Churches in attendance.  At the same time, he underlined the immense efforts, over many years, by all Autocephalous Churches in preparation of the topics on the Council’s agenda.

“The Primates of Local Orthodox Autocephalous Churches who participated in the Holy and Great Council stressed the importance as well as the historical significance of the convocation of this Council,” the release continued.  “They also expressed their confidence that the Council opens a new era of conciliarity for the Orthodox Church to express its positions on the contemporary problems of man in the world.”

The Churches of Antioch, Russia, Bulgaria, and Georgia did not participate.

The release noted that “the issues discussed in the Holy and Great Council covered important topics such as the Mission of the Orthodox Church in the Modern World, the Orthodox Diaspora and the Operational Regulations of the Episcopal Assemblies, the Autonomy and the Way for Proclaiming It, the Importance of Fasting and its Compliance Today, the Sacrament of Matrimony and its Impediments, and the Relations of the Orthodox Church with the Rest of the Christian World.

“His All-Holiness added that conciliarity is another word that characterizes the unity, holiness, catholicity and apostolicity of the Church, referring to its Eucharistic and eschatological identity and consciousness,” the release concluded.

A wealth of information, including the message and encyclical of the Holy and Great Council, the final texts of documents, transcriptions of numerous addresses, daily press briefings, and photo galleries is available on-line.

Additional information will be posted as it is received.  See related story.