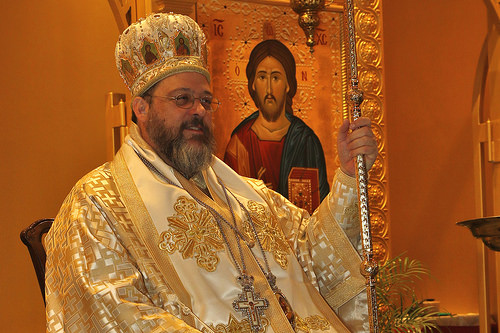 PITTSBURGH, PA — [Pittsburgh Post-Gazette] The leaders of their global churches may have some difficulty in getting together after a 1,200-year gap. But in the basement of a South Side Flats church on a recent Thursday afternoon, members of Western Pennsylvania’s diverse array of Orthodox churches put aside religious labels for a humbler cause.

As they do each week, volunteers laid out breads, pastries, cereals, canned goods and other foods on shelves and folding tables, setting up for the food-pantry distribution at Holy Assumption of St. Mary Orthodox Church. Colorful icons of saints, along with black-and-white photos of past parishioners, filled the walls behind them.

Before opening the doors, the pastor led them in an ancient Easter chant known as the “Paschal Troparion”: “Christ is risen from the dead, trampling down death by death, and upon those in tombs bestowing life.”

As the doors opened and the clients filed in, volunteer Denise Panos Daugherty was there to greet them: “Welcome … It’s hot out there. … I missed you guys last week. … We’ve got doughnuts today.”

The parish is overseen by the Orthodox Church in America, historically rooted in Russian immigration. It hardly mattered that Ms. Daugherty belongs to St. Nicholas Greek Orthodox Cathedral in Oakland, or that other volunteers come from Ukrainian, Serbian and Carpatho-Russian backgrounds. Each group, and others, have their own array of churches, shrines and lines of authority.

The food pantry is “one place where all the divisions have been transcended through the bridge of love,” said Igumen Patrick, rector of the parish, sporting a black cassock, large pectoral cross and a full salt-and-pepper beard. (“Igumen” is a monastic title, and he goes by just one name, reflecting the Orthodox convert’s Irish Catholic heritage.)

Here in Western Pennsylvania, long a heartland of American Orthodoxy, such cooperation extends to various charities and religious activities, said the Rev. Radu Bordeianu, a priest at Holy Trinity Greek Orthodox Church in McCandless and professor of theology at Duquesne University.

“On paper there are many jurisdictions. In practice there are good relationships,” said Father Bordeianu.

The relationships are mixed back in the Old World.  Leaders of the mother churches of the world’s 300 million Orthodox Christians have been preparing to make history of a truly epochal nature, but they may have to settle for something more ordinary. They plan to convene this Thursday on the Greek island of Crete to open a 10-day “Holy and Great Council.”

As planned, it would be the most broad-based gathering since the early Middle Ages for Orthodoxy, an ancient faith marked by lavish Byzantine liturgy, chant and pageantry, the profusion of stylized holy paintings known as icons, an emphasis on right belief and right practice and a belief that authority is shared by bishops rather than held by a pope.

The last time Orthodox leaders all got together — in 787 — a Byzantine monarch was on hand to welcome them to the remains of the Roman Empire. The Roman pope sent approving representatives, as the definitive split between Catholics and Orthodox was still three centuries in the future. High on that year’s agenda was a raging debate that gave us the word “iconoclasm.” (The council concluded icons should be venerated — not to be worshiped or destroyed as idols.)

This week’s gathering, decades in the planning, should still bring together a broad array of Orthodox hierarchs. But a much-touted “Pan-Orthodox council” may not pan out. Churches based in Bulgaria and Syria say they won’t attend due to disputes over the council agenda and documents. Others question the value of a council without representatives from all the self-governing churches.Despite such rumblings, the Johnstown-based Bishop Gregory of Nyssa says the council will go forward, and he plans to travel to Crete as part of the delegation of Patriarch Bartholomew of Constantinople. He said all the churches agreed in advance to the council drafts.

“Now for some of them to get cold feet or have buyer’s remorse is not serious,” said Bishop Gregory, head of the American Carpatho-Russian Orthodox Diocese. “If there is a serious issue, of course we can discuss it.”

He expects all churches will send some representation.

“If for 1,200 years we have not met as Orthodox at this level, and the global Orthodox Church is getting ready to meet and you’re not there, how do you explain that in the future?” he said. “That you had an issue about this or that?”

Father Bordeianu said the absence of some churches should not prevent others from working on agreements “move Orthodoxy forward, unrestricted by compromises with the so-called traditionalists who have undermined the conciliar process all along.”

The council is scheduled to take up six draft documents on topics ranging from rules about marriage and fasting to relations with non-Orthodox Christians and the modern world.

The council is also to take up the issue of bishops’ overlapping lines of authority in “diaspora” lands such as the United States. The council’s draft document says such situations need fixing but will take time.

Western Pennsylvania Archbishop Melchisedek of the Orthodox Church in America said his main hope for the upcoming council is that bishops have good face-to-face dialogue.

“If they resolve a few issues, that’s icing on the cake,” he said. “The main thing is they are going to get together and can actually talk things through concretely, to plan the next meeting, where hopefully they do more.”

For many lay people, news of a historic council is “not high on our radar,” said Dawn Boyle, a parishioner at Holy Assumption. They’re more focused on concrete things like the food bank.

“You’re supposed to help your neighbors,” said Ms. Boyle. “This is a front-line way of doing it.”

Orthodoxy is the predominant Christian church in many parts of Eastern Europe, the Caucuses and Middle East. But they face a range of problems, from ferocious persecution in the Middle East by the likes of Islamic State to the armed conflicts involving Russia and Ukraine, two heavily Orthodox lands.

In contrast, U.S. Orthodox churches enjoy religious freedom and have attracted converts as well as more recent immigrants. But they’ve also had to adapt to life as a minority in the American melting pot now that they’re generations distanced from their immigration origins.

The Orthodox comprise about 1 percent of the Pittsburgh-area population (and a fraction of a percent in Pennsylvania overall as well as in Ohio, West Virginia and the nation), according to the Pew Research Center.

Yet Orthodox have had an outsized impact on this region’s religious landscape. They’ve raised scores of churches with the signature onion domes of Eastern Christianity above city neighborhoods, steel towns and coal patches. That includes five cathedrals between Pittsburgh and Johnstown.

Mon Valley Orthodoxy even had a star turn in the 1978 Oscar-winning movie, “The Deer Hunter,” set in Clairton. More recently, star Steeler safety Troy Polamalu raised the visibility of his adopted faith, crossing himself after big plays in right-to-left Orthodox fashion.

Parishes in post-industrial cities are aging and struggling, but some have grown in the suburbs — including Holy Trinity, which transplanted from the North Side to the North Hills in 2013.

Among the region’s Orthodox landmarks is the Monastery of the Transfiguration on a former farm in Ellwood City, where the resident nuns celebrated Jesus’ Ascension into heaven at a liturgy last Thursday. They were joined by visitors from as far away as Michigan and Oklahoma, who brought their young children with them on retreat.After the service, the sisters provided the children with clerical costumes and banners so they could practice processing through the monastery grounds on a pristine spring day, chanting the Pascha Troparion.

The monastery is “a great place to reorient yourself spiritually,” said Kory Warr of Oklahoma City, who has been visiting for two decades since he converted to Orthodoxy and now visits with his wife and children. When their younger son, now nearly 2, was born prematurely, the couple’s first call for prayer was to the nuns.

Wearing long black habits, the nuns accompany the liturgies with Byzantine chants in a small chapel covered with large icons of the lives of Jesus and Mary. The nuns consider it their role to provide a spiritual haven and to teach, particularly young people.

“We are not here for ourselves,” said Mother Magdalena. “We are here to give” and to model the fact that one “can live a life of purity and have joy.”

“Our society is not very welcoming to the religious person,” said Bishop Gregory, the Carpatho-Russian leader. “We’re losing our kids, not just the Orthodox kids but all kids. The millennials don’t see the relevance or importance of church.”  He hopes the council answers that indifference by offering a compelling “Orthodox encounter with the contemporary world.”

Greek Orthodox Metropolitan Savas of Pittsburgh said such an encounter should come through dialogue with people at whatever their starting point, citing as a model the biblical story of Jesus speaking to a Samaritan woman despite differences over gender, ethnicity, religion and morality.

“He doesn’t require a confession of Orthodoxy” to discuss theology with her, he said. ”It seems we’re being told how to do it. You communicate the truth in loving conversation.”