Home/Seminaries/St. Vladimir’s Seminary Grants Diplomas to 29 Graduates in 2016
Previous Next

At its Commencement Ceremonies Saturday, May 21, 2016, St. Vladimir’s Seminary awarded diplomas in three programs to 29 graduates: 13 Master of Divinity, 12 Master of Arts, and 4 Master of Theology degrees were conferred. Among the graduates were ten ordinands, who will join the ranks of alumni clergy serving the Eastern Orthodox and Oriental Orthodox churches in the U.S. and around the world. (Read more about the newly ordained seminarians.) 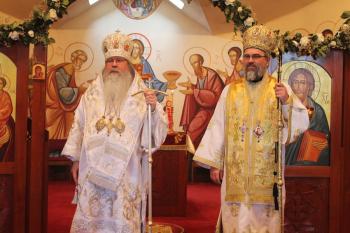 Metropolitan Tikhon with Bishop IoanOn Saturday morning, His Beatitude the Most Blessed Tikhon, archbishop of Washington and metropolitan of All America and Canada, Orthodox Church in America (OCA) presided at Divine Liturgy. His Grace Bishop Ioan Casian of Vicina, vicar of the Romanian Orthodox Archdiocese in the Americas, concelebrated with His Beatitude together with seminary and guest clergy and offered the homily. Prior to the beginning of the liturgy, His Beatitude tonsured graduating seminarians Andrew Cannon and Wesley Pulley to be readers, and ordained Wesley Pulley and second-year student Seth Earl to the subdiaconate. The Reverend David Rucker, father-in-law of Wesley, was elevated to the rank of Archpriest. Graduating seminarian John Mikitish was ordained to the diaconate by His Beatitude during the liturgy. At the conclusion of the liturgy, retiring professor Dr. Paul Meyendorff was awarded the silver St. Innocent Award by His Beatitude for his many years of service to both the OCA and the Seminary.

The Very Rev. Dr. Chad Hatfield, Chancellor/CEOFollowing Divine Liturgy, lunch, and a Molieben, the Commencement began with the traditional processional from Three Hierarchs Chapel to the Metropolitan Philip Auditorium.  Seminary Dean John Behr greeted the graduating class with both encouragement and admonition, saying “The Fathers are very clear: life is always a transition, always moving on, always stretching. Whatever path lies ahead, never forget Christ’s words: ‘You did not choose me, I chose you and appointed you that you should go and bear fruit.’”

Metropolitan Tikhon, president and chair of the seminary Board of Trustees, opened and closed the Commencement Exercises. In his remarks to graduates, Metropolitan Tikhon said, “Thank you for being who you are: fully grounded in the Church, aware that your goal as a Christian is to be grounded in Christ.” 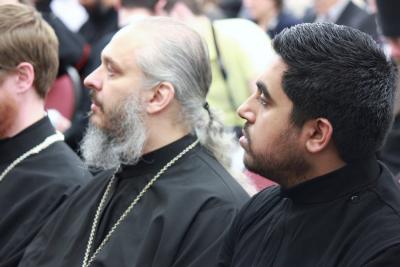 Fr. Michael Rozdilski and Shawn Thomas, Class of 2016The Commencement was was especially rich in the variety of Eastern and Oriental Orthodox students, clergy, and hierarchs represented. In addition to His Beatitude, hierarchs present for the graduation of their seminarians included seminary trustee His Grace, Metropolitan Zachariah Mar Nicholovos (Poothiyottu), metropolitan of the Northeast American Diocese, Malankara Orthodox Syrian Church; seminary trustee His Grace, the Right Reverend David, bishop of the Coptic Orthodox Diocese of New York and New England; His Eminence, Mor Timotheos Matta Al-Khoury, archbishop and patriarchal vicar in the Patriarchal Archdiocese of Damascus; His Eminence, Mor Titus Yeldho, archbishop of the Malankara Archdiocese of the Syrian Orthodox Church in North America; and His Grace, Ioan Casian of Vicina, vicar bishop of the Romanian Orthodox Archdiocese in the America. Other honored guests were the Reverend Mardiros Chevian, dean of St. Nersess Armenian Seminary; and Dr. Vitaly Permiakov (SVOTS ’04), instructor at Holy Trinity Orthodox Seminary. 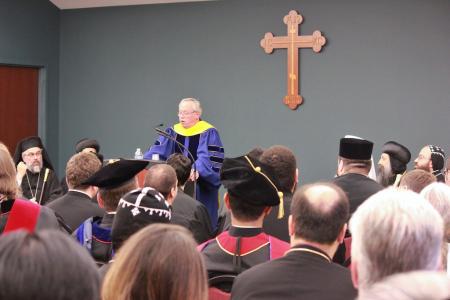 Dr. Paul Meyendorff delivers the Commencement AddressThe highlight of the ceremony was the Commencement Address by retiring professor and seminary alumnus Dr. Paul Meyendorff (SVOTS ’75), who held the position as The Father Alexander Schmemann Professor of Liturgical Theology at the Seminary. Prior to Dr. Meyendorff’s address, Mr. Alex Machaskee, executive chair of the Board of Trustees, read a special resolution from the Board of Trustees with regard to the retirement of Professor Meyendorff, recognizing his 29 years of committed service to the Seminary and its students. 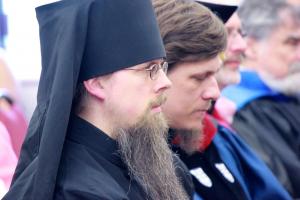 Hierodeacon Herman (Majkrzak), recipient of the St. Macrina Award for Excellence in Teaching“It is an honor for me to stand before you one last time as, together with this year’s graduating class, I prepare to leave the cocoon that is St, Vladimir’s,” commented Dr. Meyendorff. “For most of you, that has been for the last two or three years; for me, it has been 29 years on the faculty, but 57 years if you count from the time I arrived in New York with my family in 1959.”

Drawing inspiration from St. Paul’s text about his “thorn in the flesh” (2 Cor 12: 7–10), Dr. Meyendorff exhorted the graduates to be mindful that “God accomplishes his work not just despite, but through, our weakness.” He reminisced about his time at the Seminary as a young boy, as a seminarian, and as a professor, and closed by reminding the graduates to live their lives filled with the joy of our Lord’s Pascha. (Read the full text of Dr. Meyendorff’s Address.) 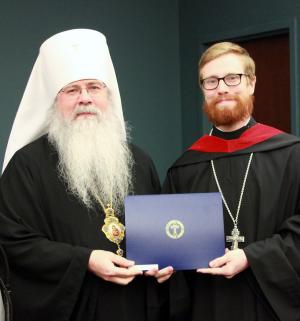 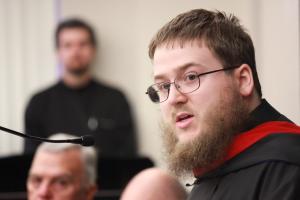 Deacon John Mikitish, Valedictorian, delivers his addressSpecial honor was given to Valedictorians the Reverend William Ray Rettig and the Reverend Deacon John Mikitish and to Salutatorian Mark Chenoweth. Student Council President Abigail Dean presented the St. Macrina Award for Excellence in Teaching, selected by student vote, to Hierodeacon Herman (Majkrzak), Director of Chapel Music and Lecturer in Liturgical Music, who is departing the Seminary after six years of directing and teaching in order to pursue his monastic vocation. 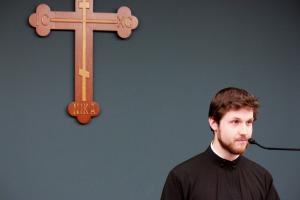 Salutatorian Mark ChenowethAlso recognized for his years of service to St. Vladimir’s was the Reverend Archdeacon Joseph Matusiak, Director of Admissions, Financial Aid, and Alumni Relations, who is leaving the Seminary to become Metropolitan Tikhon’s full-time personal secretary. Archdeacon Joseph greeted the Class of 2016 as new members of the Seminary Alumni Association, and encouraged them by saying that the friendships forged during their seminary years will continue throughout their lifetimes.