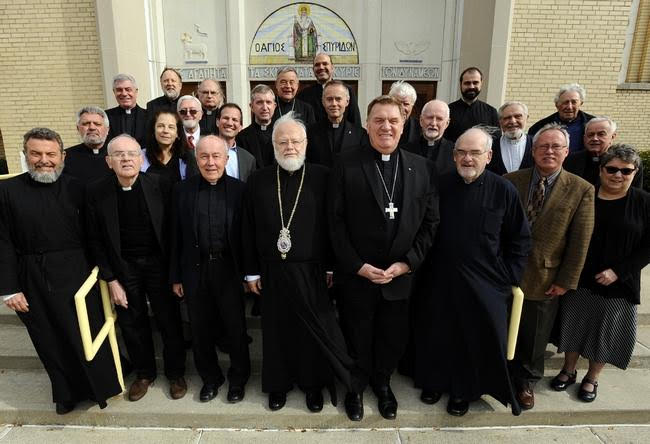 The North American Orthodox-Catholic Theological Consultation issued a statement today on the occasion of its fiftieth anniversary.

The Consultation was the first official dialogue between theologians of the Orthodox and Catholic churches to be established in modern times. It held its first meeting in September 1965 under the leadership of Archbishop Iakovos (+2005) of the Greek Orthodox Archdiocese of North and South America and Bishop Bernard Flanagan (+1998) of Worcester.

For fifty years, the Consultation has brought Orthodox and Catholic theologians together to engage in theological dialogue and discuss issues of common concern.

The full statement is below.

We give thanksgiving and praise to God, Father, Son and Holy Spirit, for the blessed opportunity to observe the fiftieth anniversary of the establishment of the North American Orthodox-Catholic Theological Consultation, in Worcester, Massachusetts, October 22-24, 2015.

The first meeting of the Consultation took place on September 9, 1965, at St. Spyridon Greek Orthodox Cathedral in Worcester, under the leadership of Archbishop Iakovos (+2005) of the Greek Orthodox Archdiocese of North and South America and Bishop Bernard Flanagan (+1998) of Worcester. This unprecedented gathering of theologians occurred after the historic meeting of Pope Paul VI and Ecumenical Patriarch Athenagoras in Jerusalem on January 5, 1964, and prior to the lifting of the anathemas of 1054 by Rome and Constantinople on December 7, 1965.

The bold decision by our churches to establish this Theological Consultation reflected the perspectives of the Second Vatican Council (1962-1965) and the Pan-Orthodox Conferences (1961-1968). This Consultation was the first official dialogue between theologians of the Orthodox and Catholic churches to be established in modern times. It marked a dramatic new phase in the relationship between our churches.

The early meetings were not easy. Centuries of divergent teachings and misunderstandings still existed. There were few contemporary models of dialogue to be followed. We give thanks for the vision of Archbishop Iakovos and Bishop Bernard Flanagan, bishops deeply committed to Christian unity. They encouraged Orthodox and Catholic theologians and faithful to move beyond isolation, and to commit themselves to dialogue in obedience to the prayer of Christ for the unity of his followers.

For fifty years, this Consultation has contributed to the ultimate goal of restoration of full communion between our churches. This has taken place through theological dialogue, nurtured by prayer and characterized by mutual respect among the participants.

Throughout these years, the Consultation has been blessed by the active participation of a number of outstanding bishops and scholars. Serving the Consultation with distinction, they have drafted statements and contributed scholarly studies on critical topics. They have also conveyed the activity of the Consultation to generations of parishioners, students and colleagues. We thank the Lord for their contributions. For those who have passed from this life, we pray that the Lord will remember them in his Kingdom.

The Consultation also has contributed to a number of other forums that bring together representatives of the Orthodox and Catholic Churches. The Joint International Commission for Theological Dialogue between the Roman Catholic Church and the Orthodox Church was established in 1979. The Joint Committee of Orthodox and Catholic Bishops in the United States has met since 1981. We appreciate the opportunities we have had to contribute to their work, through our responses to the statements of the International Commission and by providing theological advice to our bishops.

During the past five decades, there also has been a remarkable growth in positive relationships between Orthodox and Catholics. The meetings of Popes and Ecumenical Patriarchs have boldly expressed this new spirit. Relics of a number of saints have been restored to the shrines where they were originally venerated. Among clergy and laity, opportunities for prayer, study, and common witness have done much to eliminate age-old misunderstandings, and to deepen mutual respect. In particular, we note the pilgrimage of Orthodox and Catholic bishops to Rome and Constantinople in 1995; similar pilgrimages were made by groups of Orthodox and Catholics from the Boston, Worcester, Washington, San Francisco and Chicago areas. A number of institutes and seminars have been developed. Likewise, in view of the recent dramatic increase in the number of marriages between Orthodox and Catholics, we have provided pastoral guidance for those couples. All of this, we believe, bears witness to the deep desire for reconciliation and unity in faith that now characterizes the life of the People of God.

We believe that, through God’s grace, our Consultation has already contributed to the rapprochement between our two Churches. Pope Paul VI (+1978) and Ecumenical Patriarch Athenagoras (+1972) referred to the Orthodox Church and the Catholic Church as ‘sister Churches;’ we have been guided by their conviction. So we said in 1999: ‘The Orthodox and Catholic members of our Consultation acknowledge, in both of our traditions, a common teaching and a common faith in one baptism, despite some variations in practice which, we believe, do not affect the substance of the mystery. We are therefore moved to declare that we also recognize each other’s baptism as one and the same…In our common reality of baptism, we discover the foundation of our dialogue, as well as the force and urgency of the Lord Jesus’ prayer “that all may be one.” Here, finally, is the certain basis for the modern use of the phrase, “sister churches.”’

The recognition of this unique relationship compels us, all the more, to address the serious theological issues that have contributed to division. Our discussions, scholarly papers and agreed statements have examined these issues as well as teaching and sacramental practices that continue to express an essential unity in the Apostolic faith. The restoration of our unity requires solid theological reflection. We take note especially of our statements on The Holy Eucharist (1969), Baptism and Sacramental Economy (1999), The Filioque: A Church Dividing Issue? (2003), and Steps Towards a United Church (2010), which addresses issues of primacy and conciliarity. We again urge the official consideration of these statements, in a way that may lead to their reception.

The Consultation has also made recommendations for addressing a variety of challenges that we face together in North America. We have addressed concerns in the areas of inter-church marriages, the spiritual formation of children in Orthodox-Catholic families, and the commitment to uphold the dignity of human life. We have examined the challenge of ‘Celebrating Easter/Pascha Together’ (2010). We have affirmed the Importance of Sunday (2012) as a special day of common prayer. Our studies have contributed to the pastoral care of God’s people, as well as to the progress of other ecumenical dialogues.

Ecumenical Patriarch Bartholomew has said to the Consultation: ‘With scholarly insight, pastoral sensitivity and fervent prayer, you have examined and addressed the critical issues which have estranged our Churches. You have advanced the relationship between our Churches and our common witness in the world in the name of Christ. You have responded faithfully to the prayer of the Lord for the unity of his followers (John 17:21)…Truly, the fruits of the Consultation are found in its twenty-eight agreed statements. For five decades, these statements and related studies have contributed greatly to mutual understanding, theological renewal, and the resolution of our historic differences.’

Likewise, Cardinal Kurt Koch, the President of the Pontifical Council for Promoting Christian Unity, has written that the statements of the Consultation ‘have most certainly fostered mutual understanding between Catholics and Orthodox in North America, helping to create a climate of mutual friendship and productive cooperation.’ Bishop Douglas Crosby, OMI, of Hamilton and President of the Canadian Conference of Catholic Bishops, has written that ‘the Consultation has demonstrated itself to be an excellent model for dialogue, one that is rooted in both truth and charity.’

We are grateful to our Lord that he has given to us this special blessing to contribute to the restoration of the unity of our churches. We pledge that we will continue to examine the issues that still divide our churches, trusting in the guidance of the Spirit to show us that these differences are not insurmountable. We look forward to the blessed day when we can celebrate the Eucharist together.

In these times, we are especially mindful of the members of our Churches who have suffered and given their lives for their faith in Christ our Risen Lord. We are deeply grateful for their faith and their witness. While they may come from separated Churches, these faithful women and men confess the same Lord, who calls us to be one in him for the sake of the world.

We ask that the bishops, clergy, and laity of our churches continue their necessary contribution to reconciliation through common reflection on the faith, through fervent prayer, and through acts of common witness in our society.

May our good and loving Lord, through the intercession of Mary the Theotokos and all the saints, continue to guide us and bless us as we strive and pray for the restoration of the full communion of our Churches in the Apostolic faith.